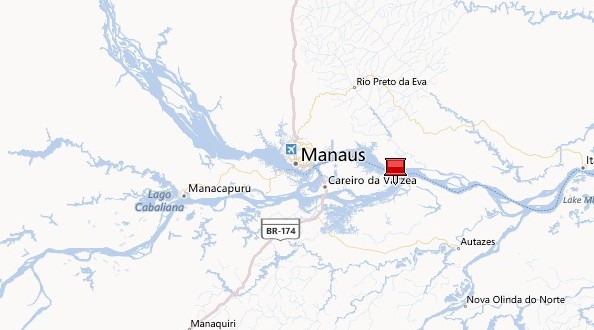 This is the sixth article in a series about the Amazon region of Brazil featured in my illustrated picture book, Alexander the Salamander. This one is about the Meeting of the Waters. Previous travelogues highlighted the Amazon River, the city of Manaus, Amazon Ecopark, piranhas, and a monkey reserve. Upcoming articles will focus on the rainforest and indigenous peoples. Enjoy these travelogues with photos and stories from one of the world’s mightiest rivers. The Meeting of the Waters, where two major tributaries, the Rio Negro and Rio Solimões, merge and form the Amazon River, is a sight to behold. Like the convergence of the Blue and White Nile rivers in Africa, the collision of these rivers is a spectacular mixture of color that looks like a blend of black coffee and milk tea. The darker Rio Negro with its decaying, organic debris and foliage flows into the light brown Rio Solimões. The result is a swirl of lighter and darker water that ebbs and flows for more than six miles downstream like yin and yang. Differences in the temperature, speed, and water density create a boundary between the two rivers that continues like an impenetrable wall until the Rio Negro is finally absorbed by the Solimões. The slower-moving water of the Rio Negro flows about two kilometers per hour at a temperature of 28°C (82°F) while the Solimões moves up to six kilometers per hour at 22°C (72°F). In July 2008, we took a river cruise from the Amazon Eco-Park Jungle Lodge to see this phenomenon. The swirling mixture of water looked almost potable. Almost. Our boat cruised for a while up and down the snaking line, giving us the chance to snap photos. I watched in amazement as the Gemini twins battled for supremacy. The Solimões was the more aggressive of the two. Sometimes it made some gains; sometimes the Negro rebuffed its advance. 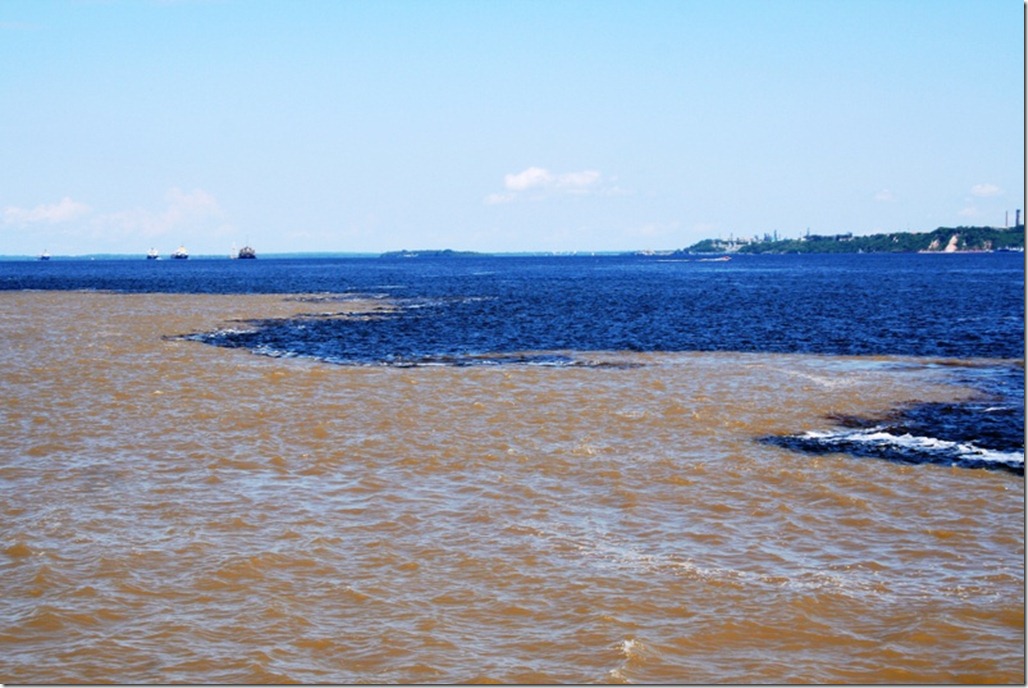 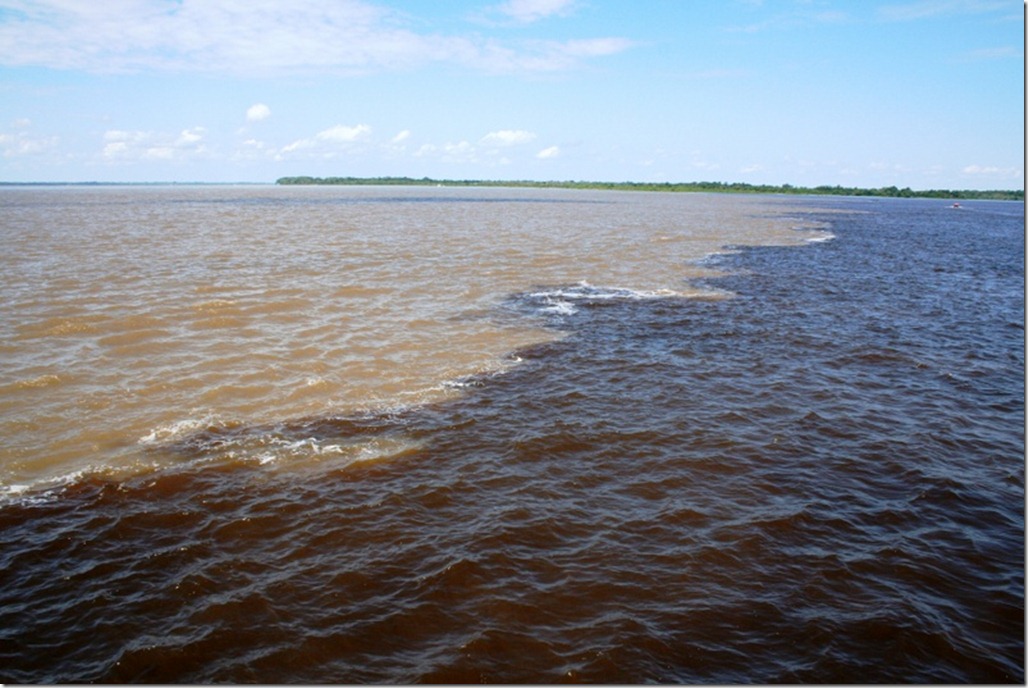 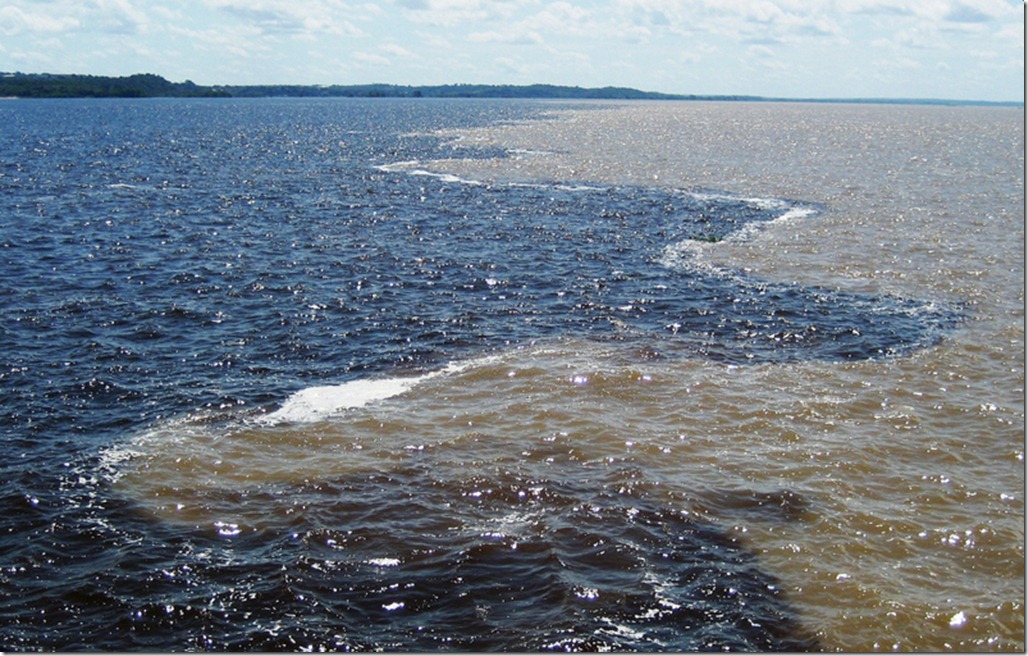 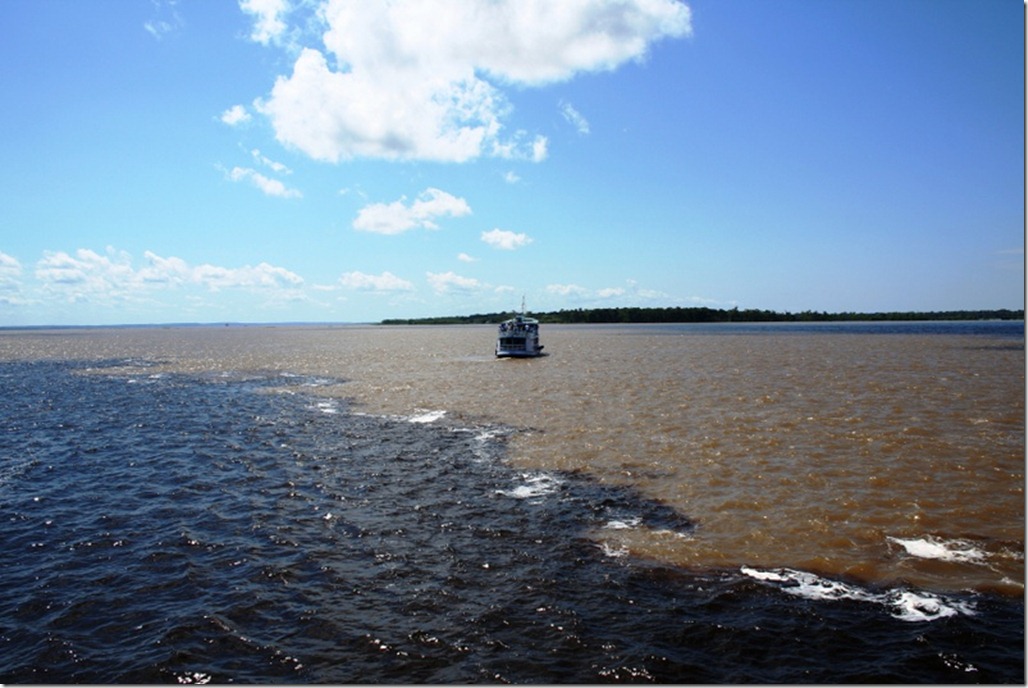 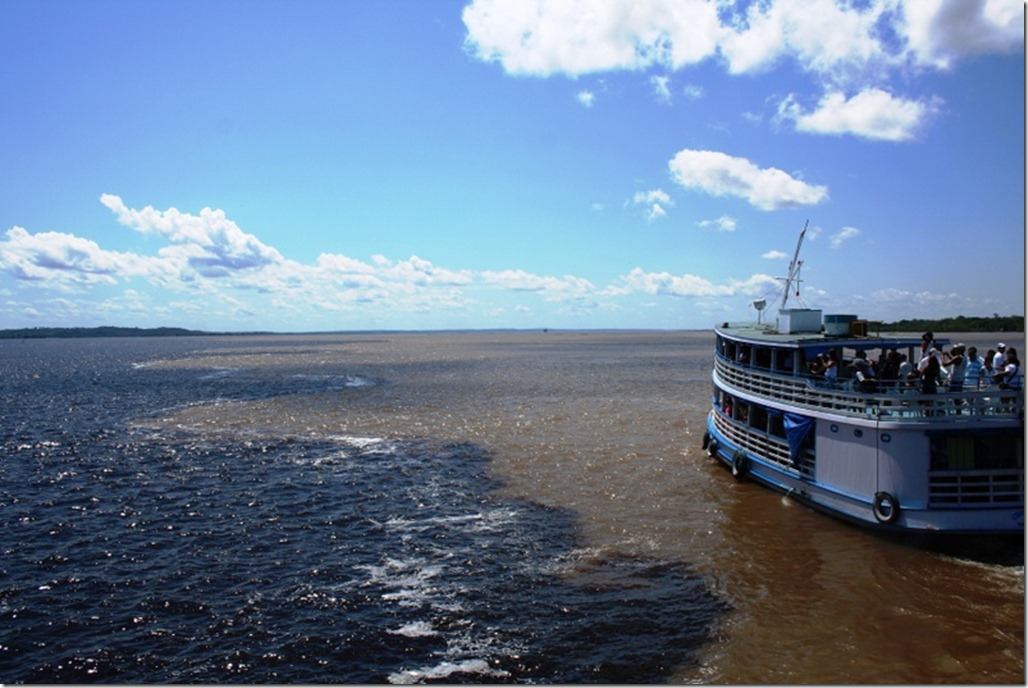 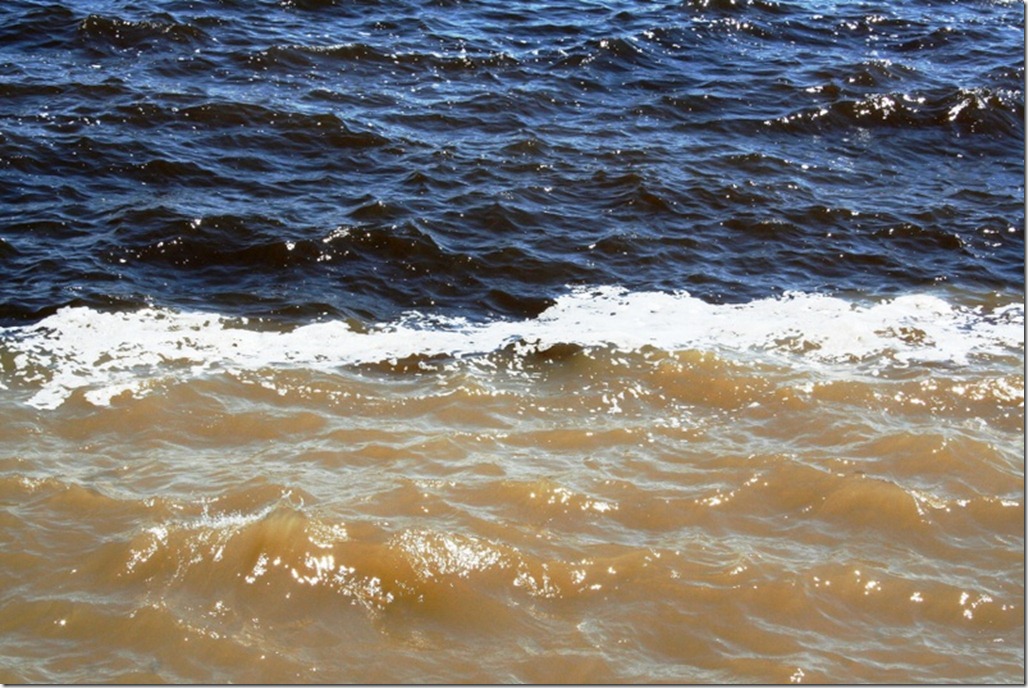 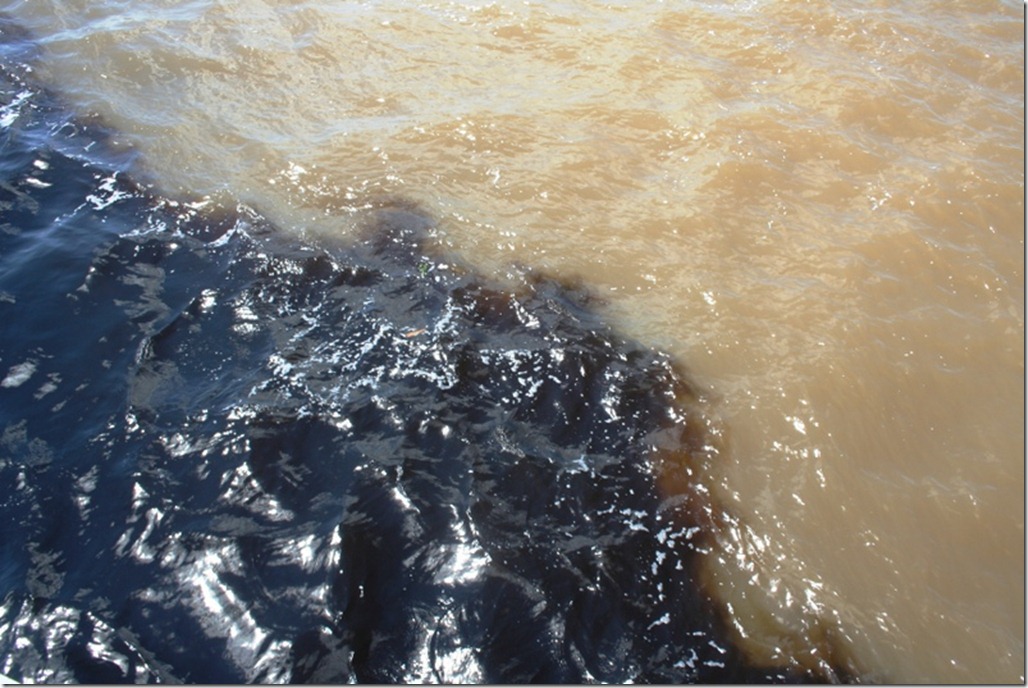 Our cruise boat departed the Meeting of the Waters about noon and passed through shallow water of a channel on the Rio Solimões. I wondered whether the trees protruding from the water were tall or the boat was close to scraping the riverbed. 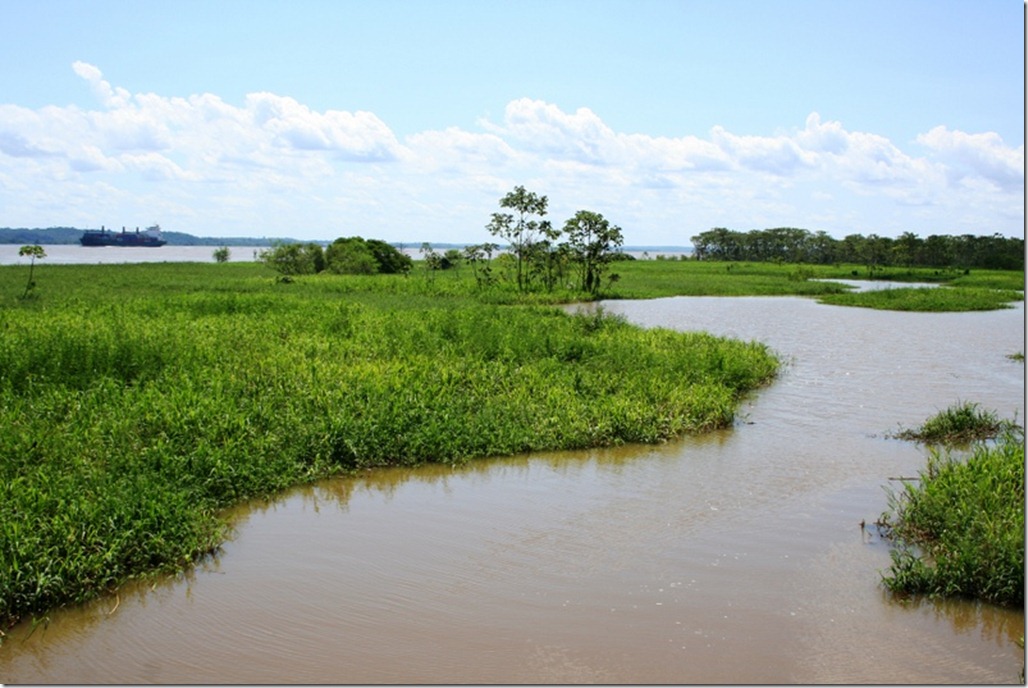 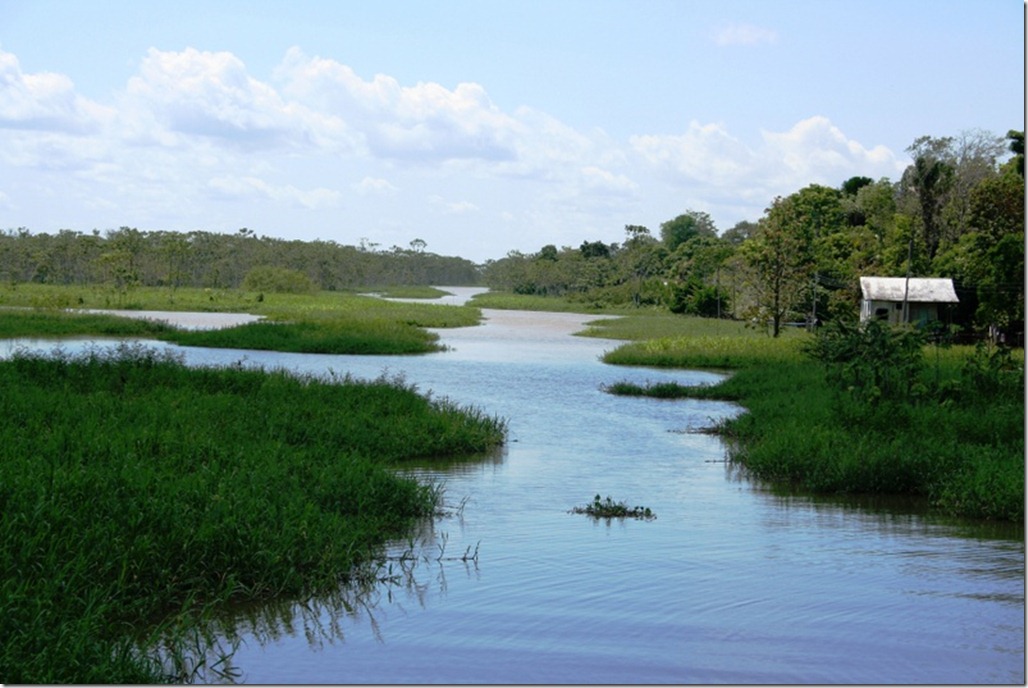 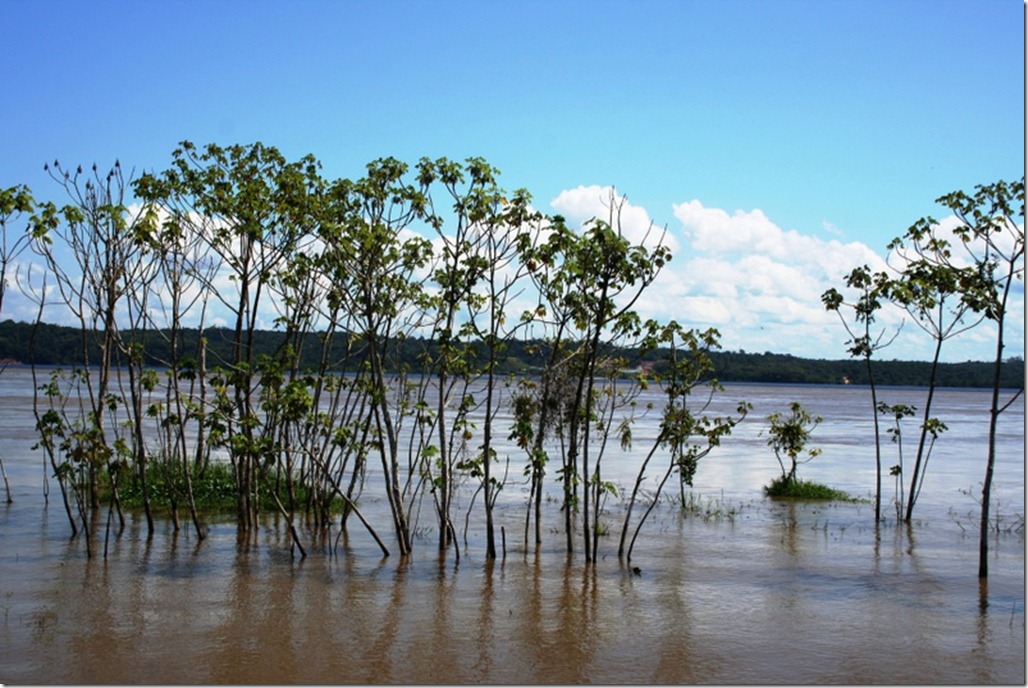 We stopped for lunch at a small village not far from the Meeting of the Waters. It was just half an hour downstream from the city of Manaus but felt a world away. With no motorized vehicles that I could tell, the residents relied on their feet and boats to get around. The church and school were the main buildings in the small, dry earthen square shaded by stately palms. 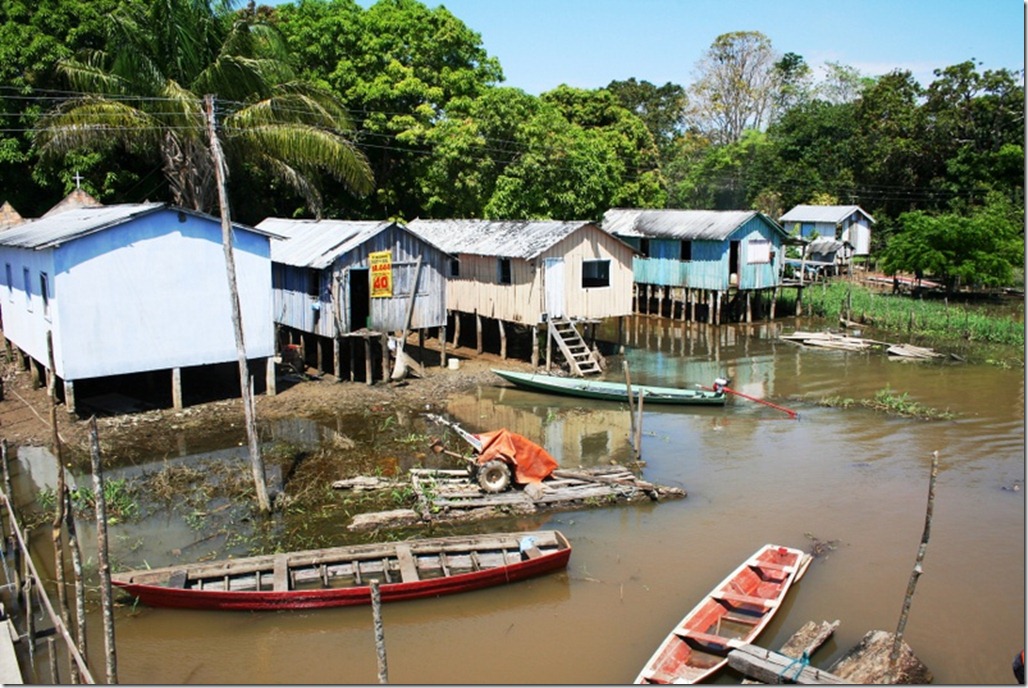 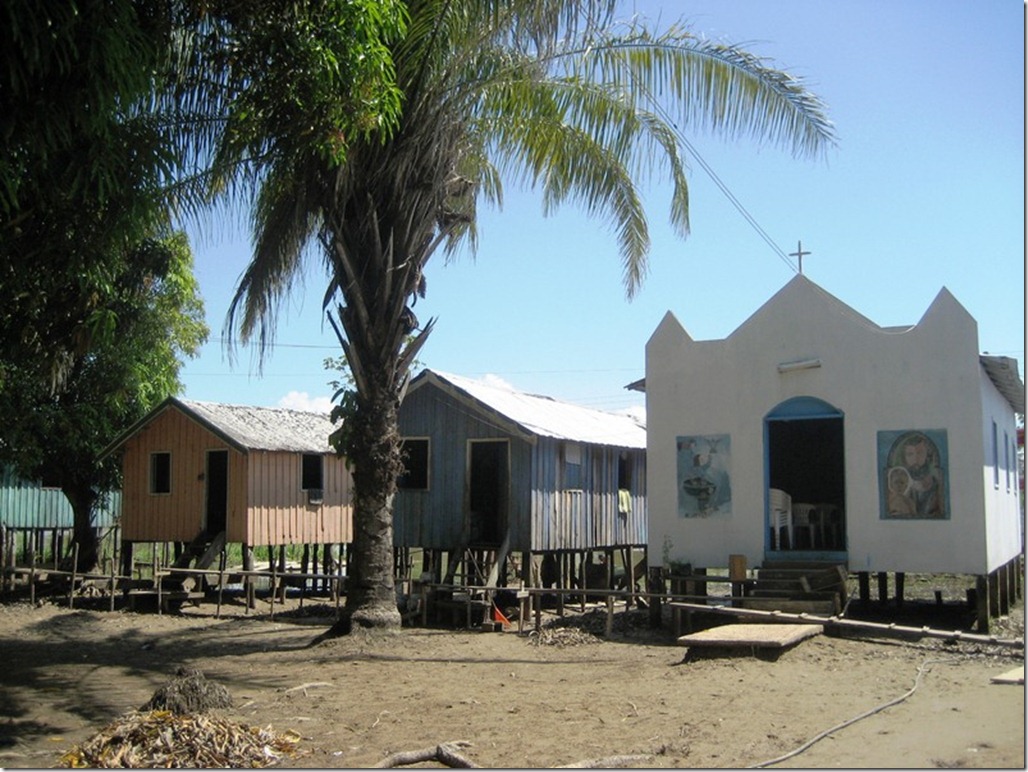 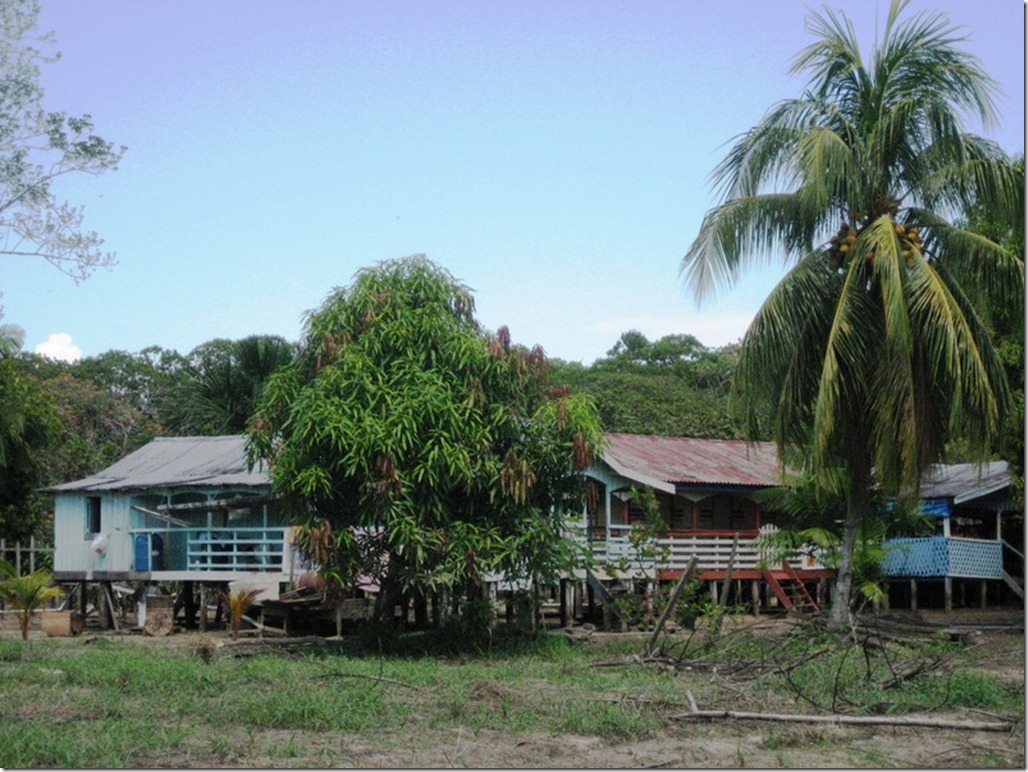 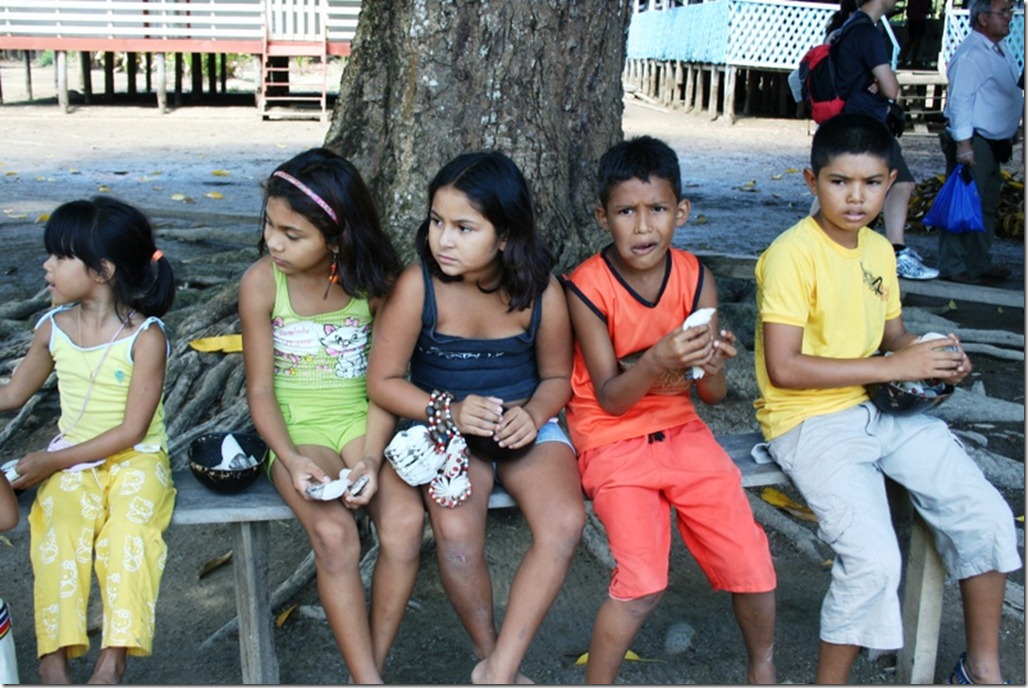 The locals seemed industrious and enterprising. They helped the tourists who disembarked to eat and browse the large gift shop filled with handmade souvenirs like stuffed and mounted piranhas that were presumably made by the villagers. I’m sure the residents earned a healthy income from the steady stream of tourists who visited each year. Others were busy working on the dock, farming, or fishing. 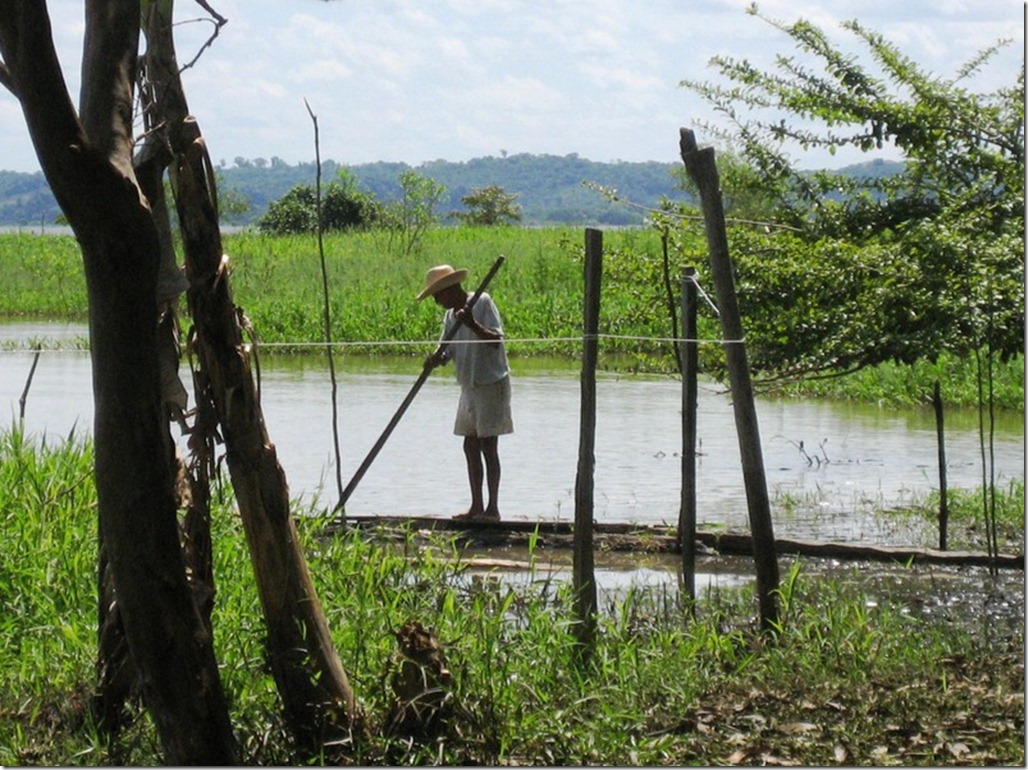 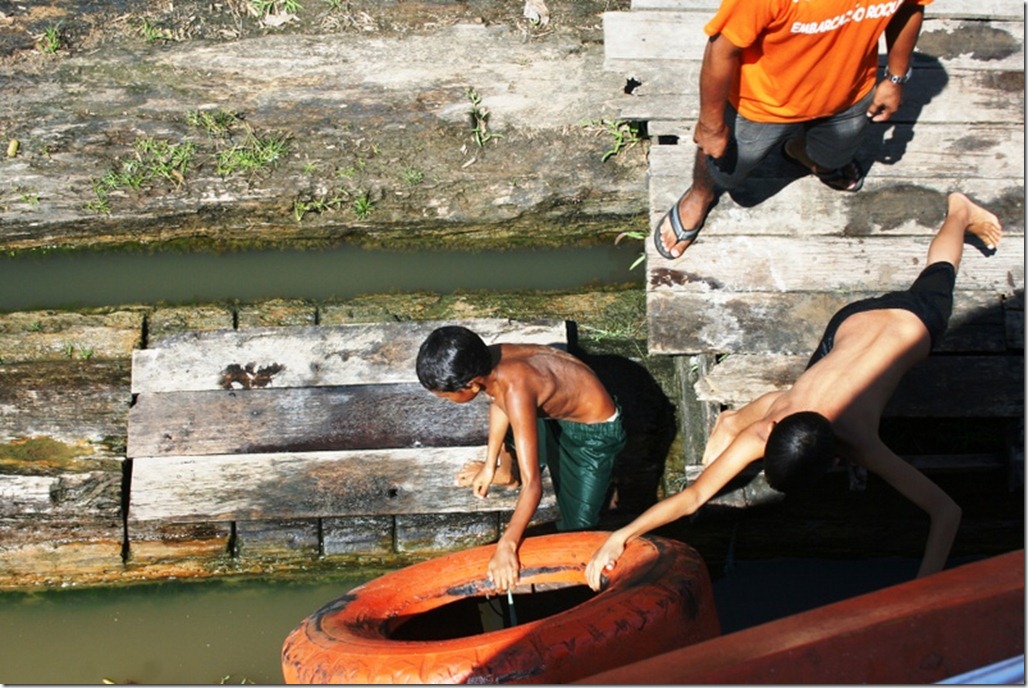 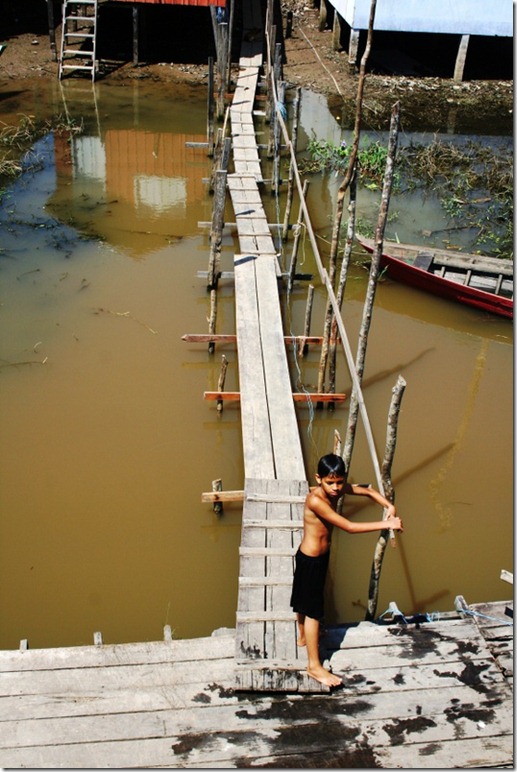 I saw one villager making rubber from the sap of a rubber tree. After tapping the tree with cuts that looked like slashes from a bear’s claws, the man collected the oozing white substance in a container and melted it into a large ball on a stick. I assumed that he was gathering the rubber to sell to a manufacturer or broker. 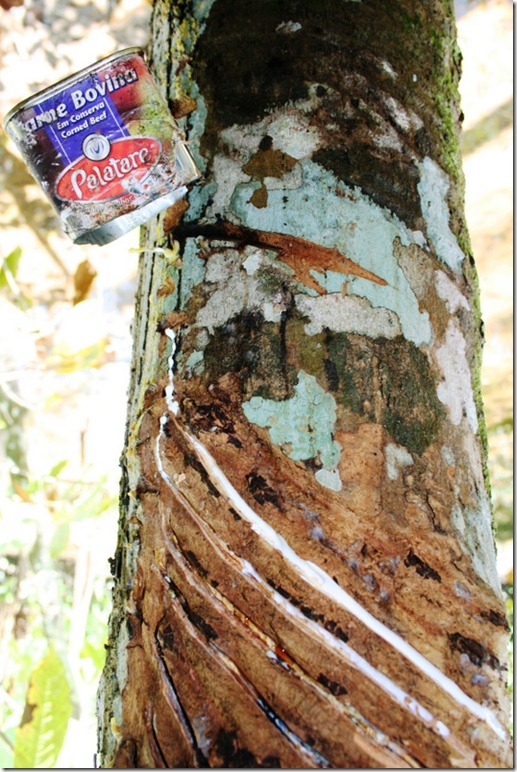 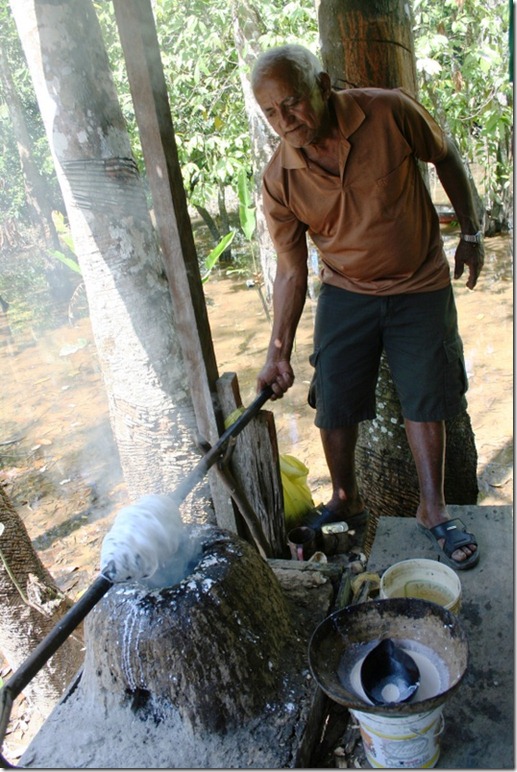 We returned to the Meeting of the Waters in the afternoon and followed the Rio Negro upstream past Manaus to our resort. Another day in the Amazon introduced us to yet more facets of this fascinating place. 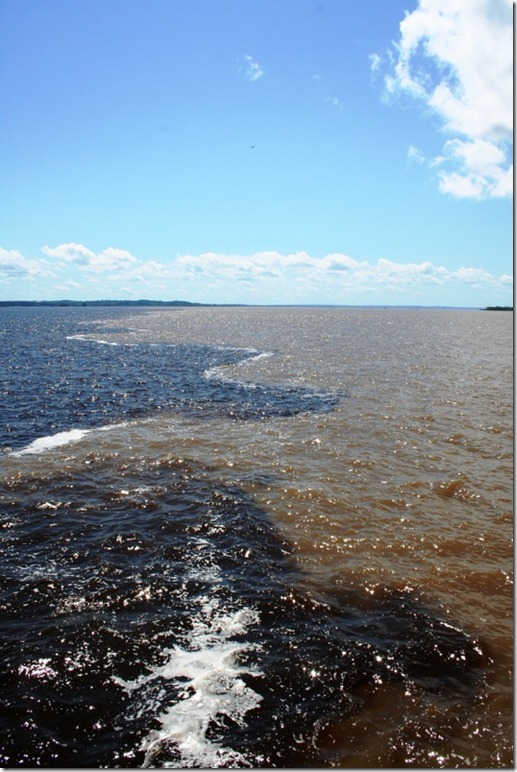 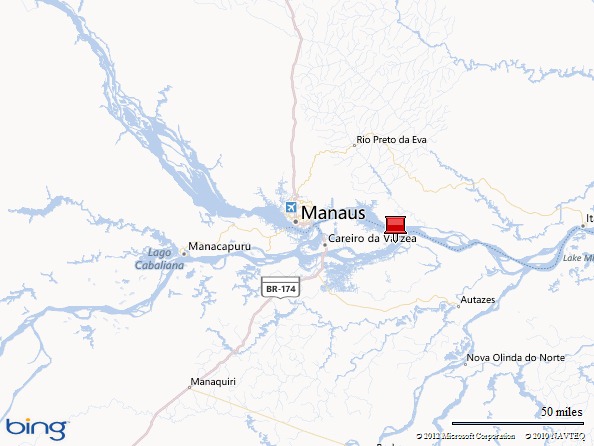