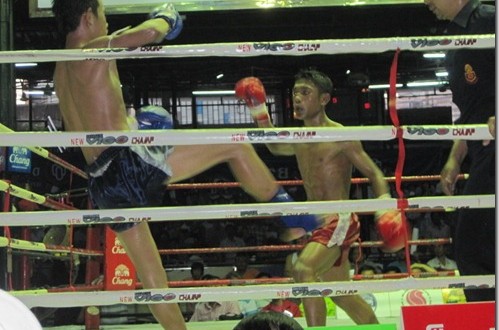 I attended my first muaythai match January 2012 at the decaying Lumpinee Boxing Stadium in Bangkok, Thailand. Also known as Thai boxing, muaythai is a form of kickboxing that combines martial arts with traditional hand-to-hand boxing and is the national sport of Thailand. Many kickboxing enthusiasts consider muaythai the "King of the Ring," with fights that feature punches, kicks, elbows, knees, grappling, and head-butts intended to wear down and knock out opponents. Fighters use power, speed, and endurance to defeat their opponents. 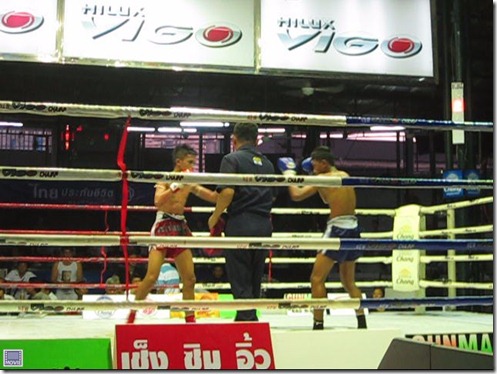 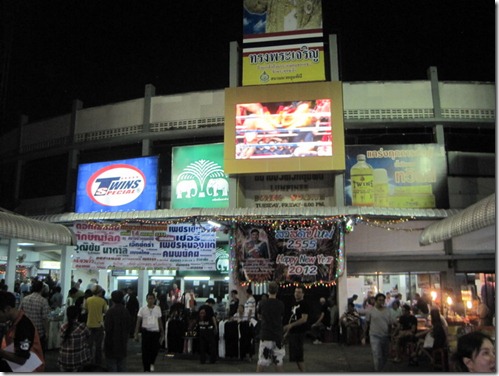 The origins of muaythai are unclear, although tradition has it that the sport emerged centuries ago from the hand-to-hand (sword and baton) battlefield tactics of the Thai army. The Thailand-based World Muaythai Council suggests that muaythai developed in rural Thailand as a way for Thais to defend their lands from invaders or settlers. 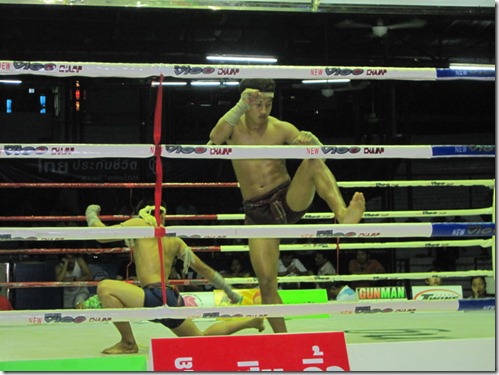 The sport came into its own during the reign of King Naresuan the Great (1590-1605) of the Ayutthaya Kingdom. In 1584, the then-Crown Prince called upon Thai soldiers to learn muaythai in order to improve their combat skills. According to the Thai Boxing Association of the USA, early bouts pitted Thai army units against one another with few rules, no weight divisions, and no time limits. The matches were very popular throughout the kingdom. 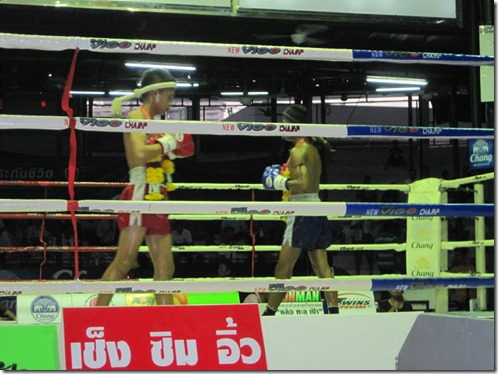 Thais generally consider muaythai an essential aspect of Thai culture. During the Ayutthaya Period, the sport became a favorite pastime among Thais, who went to muaythai training camps to watch bouts and learn it. A betting culture developed around the sport that persists today. The reign of King Rama V (1868-1910) was a golden age for the sport as fighters from around the kingdom competed in Royal Command matches for the chance to earn fame, glory, and a military title bestowed by the king. 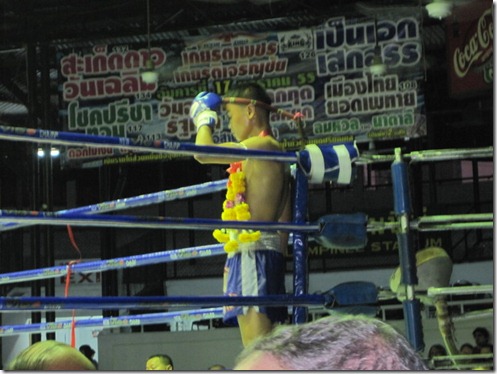 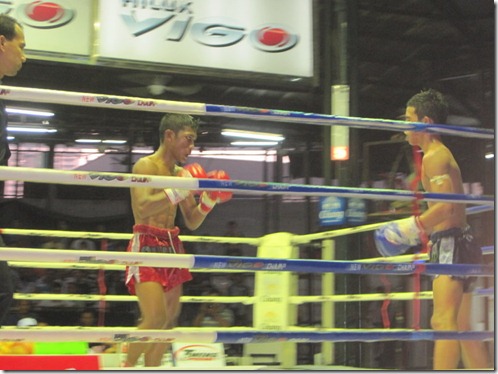 Muaythai adapted to changes in Thai culture. For centuries, matches were held wherever space was available until the standard boxing ring with ropes was adopted during the reign of King Rama VI (1910-1925). Muaythai was part of the curriculum in Thai schools until the 1920s, when it was discontinued because of the high number of injuries sustained by students. Stadiums replaced makeshift rings during the reign of King Rama VII (1925-35). In the 1930s, a uniform set of rules, time limits, and weight classes were introduced, and fighters began to use boxing gloves instead of rope bindings on their fists. After World War II, television introduced the sport to a larger audience, and the sport gained an international following. It is now practiced by hundreds of thousands of people worldwide. 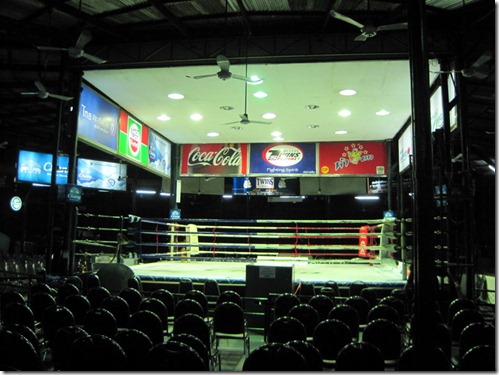 Muaythai fighters wear a combination of boxing and martial arts equipment with some ceremonial accessories. Where fighters once wore strips of horse hair, and in some cases, hemp ropes or strips of cotton with ground glass on their fists and feet, they now wear boxing gloves and cloth strips wrapped around their upper arms. Fighters used to wear groin guards made from tree bark, sea shells, or coconut shell held in place by a strip of cloth. Later, they wore a triangular-shaped red or blue pillow, and later still, a groin box. In the 1930s, kicking or kneeing the groin was banned, and fighters donned the colorful red and blue boxing shorts worn today. 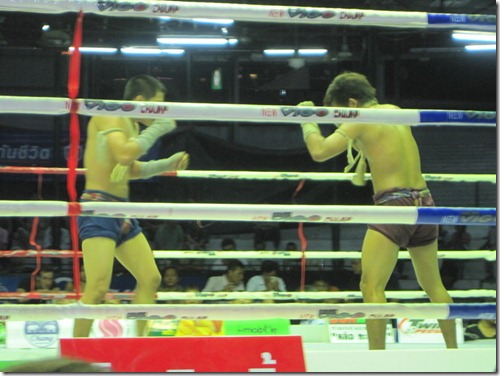 Each muaythai bout begins with a short ceremony with Buddhist rituals. Fighters remove their bright red or blue ceremonial robes and bow, pray, and walk around the ring, kissing and bowing to the posts in each corner. They walk to the center of the ring, remove their neck wreath and ceremonial headband, and begin to stretch with dance-like movements. When the bout begins, the fighters wear only boxing gloves, shorts, shoes, socks, mouth guard, and the cloth strips on their arms. 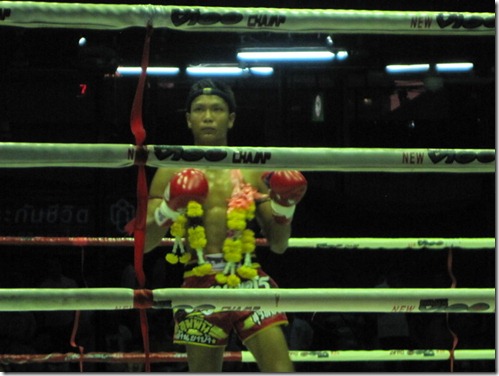 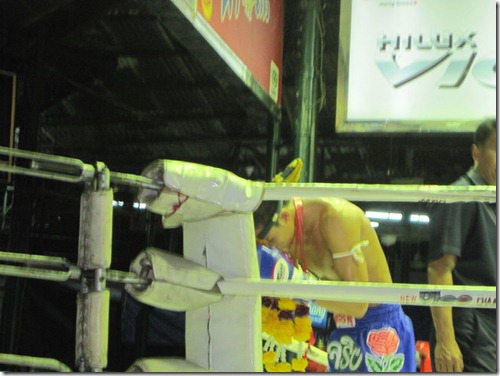 Muaythai bouts feature five three-minute rounds with two-minute breaks in between. During bouts, live musicians perform traditional Thai music, a cacophony of sound dominated by the taphon drum, finger cymbals, and an oboe-like instrument called a pi. Judges determine the winner based on how well fighters attack their opponents and defend themselves. Winners are awarded a trophy. 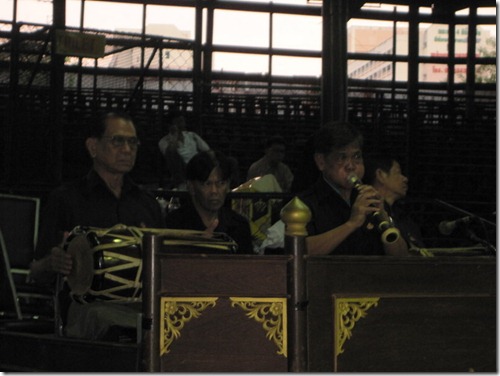 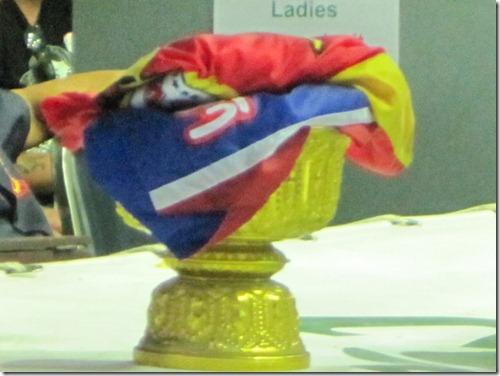 I enjoyed my first live muaythai match. I saw amateur bouts between teen-aged fighters, who went four rounds instead of five, and some professional fighters in the lightweight divisions. I was fascinating by the traditional muaythai demonstration during intermission. Prices for the Saturday night fights cost 2,000 Thai baht (about $65) for ringside seats and 1,500 baht ($50) for general admission (standing or sitting on the concrete floor only). Getting unsuspecting customers, mostly foreigners, to upgrade to ringside seats was a trick the box office used to fill seats. Those in general admission used chairs and had fine views of the ring. The crowd was small but lively; more spectators poured in later for the professional matches that were broadcast live on national television. 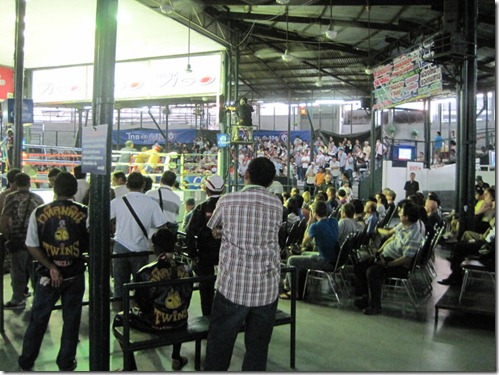 Although most muaythai fighters are male, women also participate in the sport. Tradition stipulates that women and men fight separately. The ring in Lumpinee Boxing Stadium had a sign that read, "Ladies Please Don’t Touch the Stage." 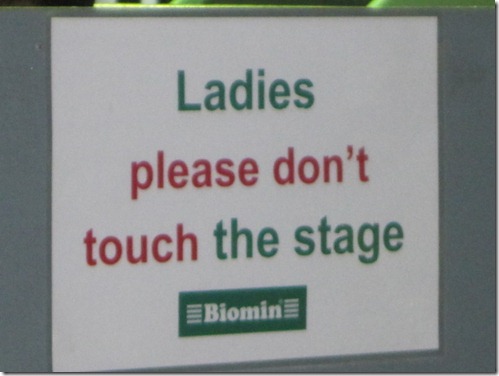 If you’re visiting Thailand for more than a week, you might find watching a muaythai match an interesting alternative to the usual tourist activities. Thai boxing is an entertaining way to experience an event ingrained in Thai culture. 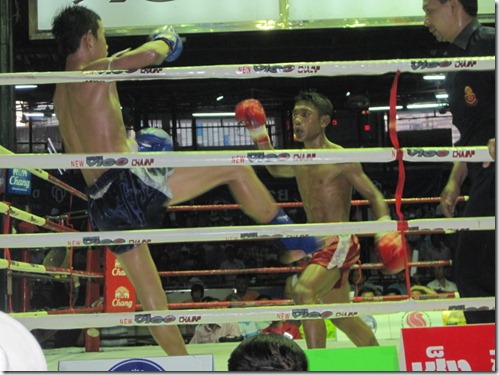 M.G. Edwards is a writer of books and stories in the mystery, thriller and science fiction-fantasy genres. He also writes travel adventures. He recently published a collection of short stories called Real Dreams: Thirty Years of Short Stories available as an ebook and in print on Amazon.com. His upcoming travel novel, Kilimanjaro: One Man’s Quest to Go Over the Hill, will be available in March 2012. He lives in Bangkok, Thailand with his wife Jing and son Alex.