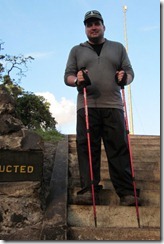 My companions stayed with me to the very end. After my tantrum subsided, I set off glumly down the trail at a slow creep, resolved to handle whatever obstacle nature cruelly laid in my path. We crossed over a mountain steam and wandered downhill for another quarter hour until the trees parted and thrust us into civilization. My heart cried out in relief when I spotted a cluster of buildings. I did it! I made it to our final destination, Marangu Gate. The view was so surreal that I could hardly believe my eyes. We had come full circle back to where our journey had begun. 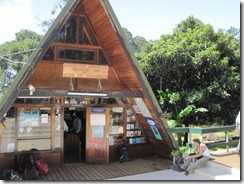 Hobbled as I was, I was in no mood to loiter at the park entrance but had no other choice than to wait for our guide August to inform park management of our departure. As he filled out paperwork, I waddled into an Apex building housing a small gift shop. Stocking up on snacks I had been deprived of on the mountain, I bought some gifts for my family back home. I picked up a blue T-shirt with a map of Kilimanjaro for my son and for my wife, who had climbed the mountain last year with another group, a floppy hat with Kilimanjaro’s famous relief emblazoned on the front. I had wanted to buy her some tanzanite, a precious gem only found in Tanzania, when I return to Arusha, but our shopping time was cut short by our late arrival at Marangu Gate. Although we should have arrived by 3 p.m., the group crawled into the park headquarters after 5:30 p.m. I was the primary reason for our tardiness.

I had 50 more meters to walk from the gift shop to the van, which turned out to be one of the toughest stretches of all after my muscles froze up as I waited for August to finish our paperwork. I leaned on my trusty hiking poles and moved one more time. The path continued downward. I reached the top of a short flight of steps down to the parking lot where vans were waiting for us to catch a ride back to Arusha. My companions found it so amusing watching me lower myself down the stairs with my poles that they snapped a photo of me that I will never forget. If I am ever incapacitated, this photo will inspire me to persevere to the end. 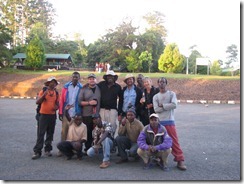 I made it down the stairs and joined the others. Celebratory beers cracked open like muted fireworks. The porters began to pile our gear into the vans. I passed on the beer but gathered the group for a photo. We did not have much time to dawdle with a two-hour van ride ahead and the sky beginning to darken. August’s hired hands pressured me to donate my gear to them, a practice that many hikers do after finishing their climbs. I politely declined and wished I could have explained in Swahili that I needed the gear again to hike the Himilayas. While it is a courtesy to donate gear to your support team, it’s a personal decision whether to give away gear to those who will undoubtedly wear it out or to keep it if you’re planning to use it again. 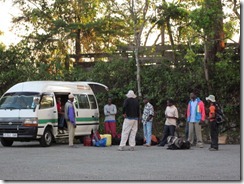 We got into the van for a two-hour ride back to Arusha. The end-of-day commute seemed anticlimactic after the saga we had just endured. My wife called my almost-dead Blackberry at the right time and discovered to her joy that I not only survived the mountain but had reached the summit. The cell phone signal was not very strong but lasted long enough to share the news with her. Tom got hold of his family and shared his news with them too. We learned that our fellow climber who had been evacuated from the mountain at Kibo Hut, Betty, had been released from the hospital and was now resting at our hotel. The doctor had cleared her to rejoin us for the flight home. Kay, Tom, and I made the most of our time en route to Arusha chatting it up about what was happening back at home. August made some stops along the way to drop off an assortment of items he had rented for the trip, including a propane bottle that he returned to a gas station in Moshi. As we waited, I slithered out of the car and blew my leftover Tanzanian schilling on some goodies for the groups. Ice cream and beer never tasted so good together.

We arrived at the newly-opened, 5-star Mount Meru Hotel in Arusha after 7 p.m. The scene was comical as three weary travelers trundled out of a beat-up van in front of a classy hotel. I tried to avoid touching anything with my filthy hands and boots. We checked in, arranged to meet for dinner at 8:30 p.m., and headed to our rooms. Although my room was impeccably clean, I was about to mess it up despite my best efforts not to soil anything! I scattered my bags on all available surfaces and disgorged piles of dirty clothing and gear. I had left a small bag of clean clothing with the hotel before I set off for the mountain and reclaimed it at check-in; it was great to have clean clothes waiting for me when I arrived. I soaked in the shower for more than 20 minutes, enjoying the hot water and washing away the grit that caked my body. Shaving and other tasks brought me in from the wilderness and closer to civilization. I felt clean and refreshed but could not wash away the aches and bruises. My leg muscles felt tight again, and limped slowly with a dull pain in my joints. I set about straightening up my gear for the trip home while I watched a television program featuring a South African explorer on travel in Angola and Botswana. Exploring the wilds of southern Africa no longer seemed so daunting. 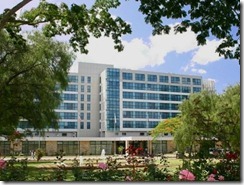 I called Betty to see how she was doing and invited her to join us for dinner, but she declined and told me that she needed to rest. I wished her well and let her know we would all rendezvous in the hotel lobby tomorrow morning for the trip home. I joined Kay and Tom for dinner at the hotel restaurant, which offered a delicious mixture of African cuisine that I ate ravenously, piling my plate full of meats and vegetables that I hadn’t eaten for over a week and avoiding foods that reminded me of mountain cuisine. Moonlight cast a beautiful pall over the hotel garden illuminated by the twinkling light of lampposts posted along garden paths crisscrossing the grounds. The ordeal we had been through began to fade from our memories as we soaked up the casual ambiance. We shared a celebratory toast and chilled out at a table on the outdoor patio, enjoying each other’s company and laughing that this time we didn’t have to eat dinner in a tent. A full week together overcoming the challenge had not dampened our budding friendship. The evening was a mellow end to an adventure wrought with emotion.