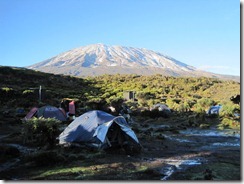 I awoke early on my final day in Arusha. We needed to depart early for the airport to catch a morning flight to Lusaka, Zambia via Zanzibar and Dar Es Salaam, Tanzania. I felt refreshed after a good night’s sleep in a real bed albeit still very sore. We met in the lobby and rejoined our companion Betty for the first time in days. I gave her a big hug. Although she did not make it to the top on our trip, I admire her for trying to climb Kilimanjaro twice, the first time in 2005 when she was forced to cut her climb short when she was hit by altitude sickness. It takes guts to pick up the pieces and try again.

Betty recounted the events that had transpired during her evacuation from Kibo Hut three days prior. The guides had placed her in a wheeled stretcher akin to a wheel barrow and hauled her down the mountain to Mandara Huts on the Marangu Route. A kindly physician on her way up the mountain spotted Betty and assisted her with some on-the-spot medical attention. A rescue team sent by Kilimanjaro National Park management rendezvoused with Betty at Mandara Huts and escorted her down the mountain with guides in tow. They loaded her into one of August’s vans and took her to a local hospital for treatment. Much to her consternation, employees who helped evacuate and treat Betty demanded compensation, even though the $742 Kilimanjaro park entrance fee includes insurance coverage for medical evacuations. She had no recourse but to pay for assistance at every turn, even the hospital bill. The Tanzanian authorities may never reimburse for her troubles. 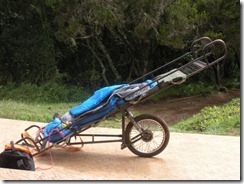 Betty’s sad story did not dampen our enthusiasm (including Betty’s) to head home. We got into August’s van as the porters stored our gear in the back and set off for Kilimanjaro International Airport. None of us spoke much on final leg of our trip; I stared out the window and watched Tanzania pass me by for perhaps the last time. I found some names of local businesses rather amusing, none more so than the “Obama Bar.” Colorful shops with sheet metal roofs painted in a livery of beige or blue with bright lettering and trim stood out among strands of palms. The subtropical climate near Arusha gave way to the semiarid steppes around the airport closer to Kilimanjaro’s shadow. I watched as we passed locals going about their business as they headed to work on bicycles, carried children on their backs or goods on their heads, or sat next to the highway selling fruits and vegetables. I saw an image of Africa reminiscent of what I often see in Zambia. 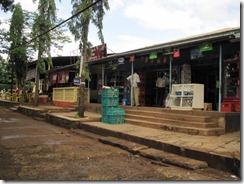 The flight home was rather uneventful other than sitting next to an oversized, perspiring, asocial man on the flight to Zanzibar who nearly crowded me out of my seat. As we waited on the tarmac at Zanzibar airport, I started to have flashbacks of a trip I took with my family there in 2010. We arrived in Dar Es Salaam less than half an hour later and navigated the byzantine international airport without too much hassle. The airline was inexplicably confused about seating assignments and checked-in bags, and it took some cajoling on our part to set them straight. We made it home safely to Lusaka 2.5 hours later without incident, back in the arms of our families who had waited anxiously for our arrival.

And thus my Kilimanjaro adventure ended. If you made the climb yourself, I commend you for your effort and hope that this story rekindled memories of your own trip. Only those who have “done” Kilimanjaro truly understand the full magnitude of climbing the rooftop of Africa.

Perhaps you are considering Kilimanjaro. If so, I urge you to plan ahead. The climb is not technically difficult and does not require special climbing gear such as oxygen, and you don’t have to be a professional mountaineer to reach the summit. That said, it’s not for everyone. I am glad I did it but would never do it again, although the idea of another adventure in the Himilayas has begun to percolate. You do not have to be in the best physical shape to reach the summit, although it definitely helps. A well-developed respiratory system may be the best indicator of whether you will reach the top. Some of the fittest people in the world like former tennis star Martina Navratilova have succumbed to altitude sickness on Kilimanjaro. I almost did too. If you are a smoker or have asthma, this climb may adversely affect you. It also helps to have a strong lower body as you will exert tremendous pressure on your legs, knees, or feet. If you have knee or hip problems, you may want to reconsider tackling Kilimanjaro.

It’s also critical that you climb with a group of people you enjoy. You will spend a week together in a harsh environment that inevitably brings out the worst in people. If you find someone annoying at sea level, they will surely drive you to distraction in thin air. The support team you hire is also critical to your success. Hire a professional guide; don’t cut costs by going with an amateur. Many companies eager for your business, and you should balance quality with cost. Steer clear of hiring a company simply because they are the cheapest and at the same time avoid choosing one that charges you thousands of dollars more than you need to spend. Your support team cannot guarantee that you will have a rewarding experience or reach the summit, but they can make or break your climb.

Talk to someone you know who’s already climbed Kilimanjaro for tips on the do’s and don’ts to help you prepare for your own climb. Although every climber’s experience is different, there are some basic rules and insights to consider before you climb. Many web sites offer good advice on preparing for the trip. Although they are not always right, they can give you advice on how to prepare. Don’t end up discovering at 16,000 feet that you forgot to bring a critical piece of equipment.

Finally, it’s good to have an inspiration to guide you up and down the mountain. Maybe it’s your faith, family, or friends. Maybe it’s a goal you’ve set for yourself. Or perhaps it’s Steve Jobs and the marvelous gadgets his company has created for the mobile lifestyle. Whatever sustains you whenever you’re in a very uncomfortable situation or driven to the point of despair will suffice.

If after reading this story you have questions about climbing Kilimanjaro, you may contact me at mgedwards@worldadventurers.com for more information.