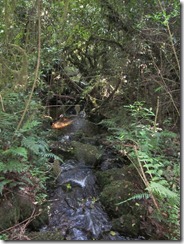 Having left Tom and August far behind on the Marangu Route, Kay and I with Minja in tow continued our journey to Mandara Huts full of vigor and very happy that the end of our journey was near. The trail wandered along the broad, gently descending slope of Kilimanjaro with occasional drops into small ravines. We passed briskly through fields and strands of trees of varietals I could only guess but nonetheless made the view more interesting. My body held up well with the slope gradual and unoffending to the knees and joints, and I bounced along with the indomitable Kay without overexerting myself. 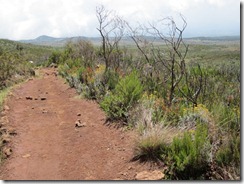 A couple hours into our walk the forest swallowed our trail as one would expect heading into subtropical lowlands. Wispy entrails of moss befitting a rain forest covered many of the trees and hung like tattered voiles that would surely spring back to life when the rains returned. Although we were hiking during Kilimanjaro’s second shorter rainy season, we were blessed with weather that had remained remarkably dry. 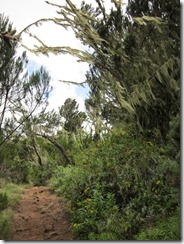 Our next destination, Mandara Huts, seemed ever elusive as our path continued on unbroken far longer than we would have liked, always lying ahead like a mirage that continually evaded us. Once again Minja underestimated the time and distance. To humor ourselves, , Kay and I decided that we still had somewhere between five minutes and five days more to hike. It actually took us about two hours to reach Mandara Huts. Along the way I snapped dozens of photos of the area to remind me of its surreal beauty. Before long we had arrived at the huts – and not a moment too soon. After gracing the palatial bathrooms that were impeccably pristine and out of place in this wilderness, I bought a celebratory Coca-Cola to satiate my thirst. Kay cracked open a “Kilimanjaro” beer and guzzled it down. Then we waited. And waited some more. We did not want to continue until Tom and August had rejoined us so we could reach the end of our journey together. The camp operator told us that the final leg was about three hours ahead and much steeper than where we had already passed, but I didn’t worry too much about it. I could do this. 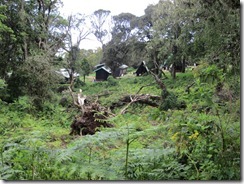 Minja had disappeared on some unknown errand that became clear to us when he suddenly reappeared and announced that lunch was served. Even though it was lunchtime, it came as a surprise to us that we would stop to eat because we seemed so close to the end. Plus, up to that point dined exclusively in tents. It hadn’t occurred we didn’t need to use a tent in the lowlands. Minja motioned for us to enter the largest building in the camp, a large lodge that served as a resting point for climbers hiking the Marangu Route. We sat down at a wooden table with hewn benches and were served fried eggs, banana, toast, and instant coffee or cocoa, a meal like any other we had had for the past week. The nourishment did not sit well with our palates, and we ate uninspired.  Tom and August arrived at Mandara Huts about 15 minutes later. Tom joined us for lunch as August sauntered over to Minja and struck up a conversation with him and someone I took to be a guide from another group. I glanced over at the grub served to a group of climbers at the next table and coveted their food. I was apparently so desperate for variety that I was tempted to barter my delicious fried eggs for some fattening, greasy chips!

We set off for Marangu Gate about 2:30 p.m. August confirmed that the trip would take about three hours. We walked together as a group with Kay, Tom and me joined by August and two other guides. The deep woods enveloped us and dimmed our path, letting in just enough sunlight to keep drop hints that a gorgeous day lay above us. The trail grew steeper and uneven with occasional drop-offs held in place by rocks and roots. The suddenly steep descent pounded my knees and joints, conjuring up the pain with a vengeance. I pulled out the hiking poles I hadn’t used all day from my day pack and wielded them like extensions of my arms to cushion the blows. The poles helped me keep a brisk pace for at least two hours. I stayed ahead of the group, assuming that I was likely the slowest one and the pacesetter setting the tempo. As I hiked the pain migrated from my knees to my lower thighs. I tried slowing down and walking in measured steps, stopping at each drop-off to lower myself down carefully. This strategy eventually failed, and hiking became excruciatingly difficult. Each step burned! It sorely tested my diminishing strength. My legs pleaded with my head, but it fell on deaf ears. I was determined to end this once and for all. 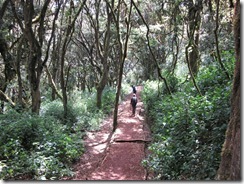 We stopped briefly at a mountain stream with glacier runoff cascading downhill. One of the guides went down to the water’s edge and dipped his canteen in the water. He offered me some. I took a sip. It was delicious! Evian and other waters that claim to be bottled at a glacier’s source could never compare to the rich taste of water trickling down from the glaciers adorning Kilimanjaro’s summit. For a few moments I felt refreshed and reinvigorated. Until I started to move again.

We hiked for another hour to where I thought the entrance should be. We came upon a trail sign that announced we had another 2.5 kilometers until Marangu Gate. My heart sank. That was not the news my poor legs needed to hear! My knees and joints felt as if they needed reconstructive surgery after this was all over. I had to press on. I justified my seeming reckless by reasoning that we weren’t far and that I didn’t want to let my colleagues down. I didn’t want to be evacuated from the mountain. I needed to get off this mountain before sundown. My conscience lit upon any excuse I could find to coax myself to continue.

We pressed on. Finally, at the point where I was certain the Marangu Gate should have been but was not, I lost it. My temper flared and vented my spleen at the mountain, at the park management, and at August for everything that had worked against me. Why did they lie and claim it was only 2.5 kilometers to the entrance? I fumed over my idiocy for being crazy enough to go on this trip and risking everything for a dream. For what? Just to reach the top of some place man was not intended to climb? In my delirium I simply ran ahead like a mindless, instinctive animal, determined to find the entrance once and for all. My hiking poles propelled me faster than I should have gone. The back of my mind wondered whether I had left the others behind; I dared not look back to see if anyone had followed me in case I tripped on a rock or a root. Finally, I stumbled and fell to the ground and collapsed on the dirt trail. I was spent. My body could not keep up with my rage. I floundered like a spirit trapped inside an exoskeleton cell. 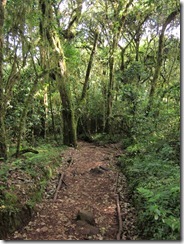 August was beside me in a flash. The others soon caught up and gathered around me. August, a man who had once climbed up and down Kilimanjaro in 36 hours, looked down at me with pity. His eyes told me that he was sorry that I was in pain and would help me to the very end. He pulled me up, I refused to let him assist me. I was going to make it on my own or die trying.