I woke up early in the morning at sunrise. I hadn’t had much sleep the night before but felt strangely rested as sleep deprivation hoodwinked me into thinking that I had had ample rest. As I fought my way out of my tent, I tripped on the canvas and landed hard against a large boulder right in front of me. My already-decrepit right knee slammed into the ground, and my left elbow smashed into the boulder as I fell with a thud. Kay exclaimed, “Are you OK?!” I grunted angrily to channel the pain and frustration and spat, “Great, just what I needed!” Our lead guide August suggested again that I be carried off the mountain, but I flatly refused. The worst Kilimanjaro could throw at me was past, I surmised; I wasn’t about to end the climb an invalid hauled down in a stretcher!

Once I was comfortably balanced on my feet and able to walk on my own cognizance, I dusted the soil off my clothing and readjusted my flailing ski hat and propelled myself forward carefully to the bathroom facility at Horombo Huts without using hiking poles. My knees were sore and stiff, although the pain subsided as I moved around. I scooped up the meager toiletries that I had flung to the ground when I fell and hobbled downhill to the stout building that looked like a faux chalet. I went in and was relieved to discover that the toilet was somewhat clean with a half-used roll of toilet paper. I lacked towel, toiletries, and time needed to take a shower and opted for a sponge bath — sans the sponge — at a lone working sink. The water ran cold, of course. Yet it felt great to wash away a day’s worth of grime from Kibo Peak and feel somewhat refreshed. One more day, I thought to myself. One more day until we returned to civilization and a 4-star hotel with a shower and bed.

I rejoined Kay and Tom on last time at the mess tent that had become our nomadic sanctuary. It was the first time we had all had a chance to sit down and commune since prior to the final ascent, and we talked about how fulfilling the climb had been for each of us despite the immense challenges that Kay and Tom had obviously weathered better than I. We reminisced about our adventures on the mountain and recounted the bond that we had developed with one another over the past week. We were no longer colleagues; we were friends who had shared a common fate. Our mood was upbeat when we thought of how our journey would soon end but also somber, tempered by the knowledge that the adventure was almost over. For all the difficulties we faced, we could not deny that Kilimanjaro had profoundly affected all of us.

Tom, Kay and I settled the final bill. We had to pay each guide, porter, cook and waiter a tip according to their job and service they had provided. The cook got a nice tip for serving the best meals he could with limited ingredients, as did Minja for doubling as a porter and guide; Manda’s brusque nature earned him the bare minimum. Tom volunteered to be our accountant and apportioned the dollarized tips from August on down like capitalist to proletariat. We then stepped out of the mess tent and gathered the group together for a short, ad hoc ceremony to acknowledge their support. Tom did a masterful job serving as emcee and called each and every one of them forward for a handshake, thank you, and a tip. We closed the “ceremony” by bringing everyone together for a group photo to commemorate the journey. 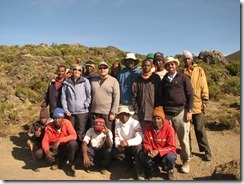 We set off about 10:00 in the morning for our final day of hiking. We still had 21 kilometers to go and kept a steady pace along the way. Tom and August fell behind as Tom resumed his shutterbug habits while Kay and I forged on ahead with Minja shadowing us. I moved slower than the others but was determined not to let my poor condition hold back the group. Kay and I stopped occasionally for photos and kept up a steady conversation about life and its complications for hours. It was a welcome break from three days of iPod songs that kept me company but never seemed fulfilling enough. The terrain on the Marangu Route caressing the southern slope of Kilimanjaro was lush with trees and plants, a welcome break from the desolate landscape we had seen for the past three days. We marveled at the odd-shaped trees and unique flowers lining the trail. I must have taken over 100 photos of different iterations of the same foliage!

We stopped a couple of times for snacks after Minja suggested in Swahili that the next camp, Mandara Huts, still lay far ahead. My appetite had returned, and I consumed biltong (a type of southern African beef jerky), macadamia nuts, and a Cliff Bar. My legs seemed to do well too without too much pain. For a few hours, I found myself a nice groove that I wanted to sustain the rest of the way to the park entrance. Once again, I misjudged the difficulty that lay ahead.