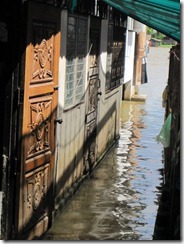 My family and I recently moved to Bangkok, Thailand. Our inaugural outing took us to Koh Kred, also known as Ko Kret, an island in the Chao Phraya River in the Pak Kret district of greater Bangkok. It was a fun but wet adventure. 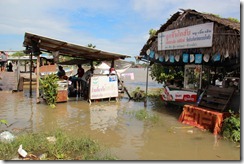 Created in 1722 when the Thais built the Khlong Lat Kret navigation channel, Koh Kred is the home of a popular form of terracotta pottery known as Monam Lai Wichit and a peaceful atmosphere far from the buzz of nearby Bangkok. A Buddhist temple, Wat Paramaiyikawatworawihan, dominates the northeastern part of the island and features a unique pagoda, Chedi Mutao, that leans over the river as if inspired by the Tower of Pisa. 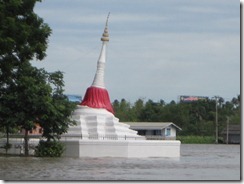 The temple (wat) is one of several dotting the island influenced by the Mon (Raman), and ethnic group that preceded the Thais in the Chao Phraya delta region and flourishes between the 6th and 10th centuries A.D. (The other temples on the island are Wat Phailom, Wat Saotongthong and Wat Chimphi.) 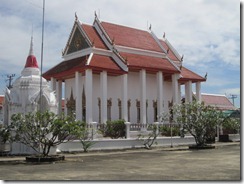 The Mon, who are prevalent among the island’s inhabitants, run many pottery and souvenir shops and stalls in Ko Kret’s markets. One village on the eastern side of the island known locally as the “Koh Kred Pottery Village” is supported by the Thai government’s “One Tambon One Product” (OTOP) local entrepreneurship program. (A “tambon” is an administrative subdistrict. OTOP-style programs are popular in Asia.) 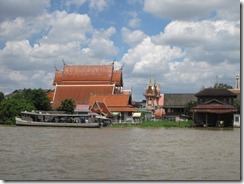 We took a ferry from the western bank of the Chao Phraya River to the island at Wat Sanamnau. We should have known what lay ahead after wading through muddy waters that washed over the ferry gangway. Flooding on the Chao Phraya River had raised the water level a meter higher than normal, foreshadowing a soggy visit to Koh Kred. Ferry operators overloaded the boat with tourists, whose weight caused the boat to list and elicited startled gasps from trepid Western and Thai passengers. I surveyed the river as the bloated wooden ferry struggled to cross over to the island. The river was swollen and churned brown with silt and debris floating from upstream. The lush green landscape fed by heavy rainfall was interspersed with rambler houses bedecked with orange Asian tiles crowding either side of the river. A few more meters of floodwater would have submerged the entire area in a murky soup. 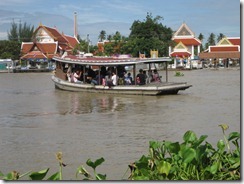 The boat dumped us on a metal gangway superheated by the morning sun. Barefoot from traipsing through the water at Wat Sanamnau, I did an involuntary “hot, hot, hot!” dance on the pier until the crowds subsided and let me pass to shore, where I could put on my shoes. My family and I wandered briefly through the Wat Paramaiyikawatworawihan temple grounds as the sun beat down on us. I admired the mixture of ornate Buddhist architecture with traces of Mon influence most apparent in facades of some wooden structures. 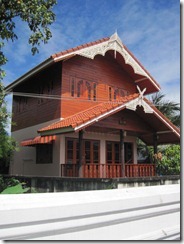 Snapping photos and video, we stopped to enjoy some delicious coconut ice cream before wandering into the covered market. (The ice cream was a concoction of vanilla ice cream, sticky rice, and processed coconut milk.) 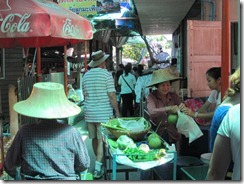 Stalls turned to shops in a covered area flanking the north side of the island. We browsed the stores but did not buy much. I purchased an over-the-top faux Thai “silk” shirt for a few dollars while my wife sampled and bought delicate Thai desserts made from boiled egg yolk and other confections. 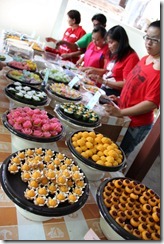 Our disinterested son bumped along with us and zeroed in on some items he thought might make good toys, but the shops at Koh Kred didn’t make many products appealing to young boys. 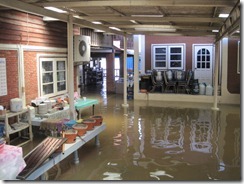 As we walked along an elevated corridor about two feet above ground, we noticed that water had flooded shops with floors at ground level. The shop owners did not seem to mind standing or sitting in water and were more preoccupied with making sales to the few visitors who had braved the flooding. Accustomed to the flooding, the vendors tended displayed their wares on tables in standing water as if it did not exist! Some of the wealthier shop owners installed raised flooring that helped keep their stores dry.

Click here to read part two of our adventure on Koh Kred Island.