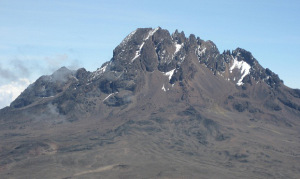 Our leader August woke me up from a deep sleep in my tent at Kibo Hut.  It was late afternoon.  Nary three hours’ rest and we were on the move again!  My body begged for relief, but August insisted that we make it to Horombo Huts before nightfall.  I struggled to stretch my joints that seemed to be frozen in place despite the warm temperature.  My hands forced my aching feet into a pair of tennis shoes.  After over 15 hours in heavy weight hiking boots, they needed to wear something more comfortable, rough terrain be damned.  The cook asked voicelessly whether I wanted something to eat, but I waved him off.  Who needs food when you’re sleep deprived?

August accompanied me on this leg of the journey.  Kay and Tom, who were more rested than I, had gone on ahead earlier with their guides.  Horombo Huts on the Marangu (Coca-Cola) Route was at least three hours more down the trail, and at this late hour I was concerned whether we would make it to camp before dark.  I was relieved that the trail ahead was more gradual than what we had faced on Kibo Peak and would be easier to hike – or so I thought.  It stretched for miles past snow-capped Mount Mawenzi, a sight that left me both comforted and dismayed.  It gave me a renewed sense of purpose, yet it looked like a very long way to hike.  Horombo Huts was about nine kilometers down trail somewhere behind the mountain.  Great, I thought, still long way to go.

I left behind all my belongings save some light outdoor clothing and backpack.  I refused August’s offer to carry it.  We set off together, leaving behind the porters to tear down camp and follow us.  As I left Kibo Hut, I looked up at Mount Mawenzi and noticed the outline of what appeared to be two Buddhas on the mountain face sitting cross-legged with the palms of their hands pressed together prayerfully.  What an amazing view, I thought.  I wondered whether anyone else had seen these Buddhas or if I was merely delirious with altitude sickness.

At first walking was torturous as we picked our way down a rocky trail that looked as if it had been made by hikers too lazy to follow the Marangu Route.  I had better motor control in my tennis shoes and was able to keep my balance and avoid sliding, although I still used hiking poles as a precaution.  We joined the Marangu trail and headed southwest toward the park entrance 30 kilometers downhill.  August had insisted that we press on in order to shorten our hike on the last day.

As we hiked on the flattest terrain I’d seen the entire trip, August and I discussed the climb at length, going over what went right and what could have gone better.  He seemed genuinely interested in my suggestions for improvement.  I complimented him for his perseverance and thanked him profusely for helping me scale Gilman’s Point.  I gave him a plethora of helpful tips ranging from revising the route to eliminate the acclimatization hike to School Hut and differentiating his customers depending on age and physique.  I suggested other services he could add to his repertoire, including a massage service one of my companions had proffered a few days earlier.  I told him that although I personally appreciated his assistance, other members of our group have told me that they could have had a better experience and pointed out that even though he went beyond the call of duty to guide Betty, the route he chose may have been her undoing.

We walked and hiked for a couple of hours, eventually lapsing into silence as we ran out of things to say.  Along the way I took a few photos and marveled at Kilimanjaro rising up behind us like a lepress, the elegant beauty of Mawenzi, and the desolation of the mountain plateau.  I studied the landscape and noticed that the volcanic rocks littering the ground were twisted into odd shapes.  Some looked like distorted likenesses of distraught climbers whose faces were tortured by the horror of failing to make it to the summit.  Plant and animal life was sparse on the plain, yet I passed piles of dull-colored elephant dung along the way.  Curious, I asked August about it, and he responded that elephants once roamed the plain until a few years ago when the Tanzanian authorities fenced in the park to keep them out.  While I was disappointed the pachyderms had been deprived of their natural habitat, I couldn’t imagine running into one after coming off the mountain!

At dusk we entered a hilly area with more vegetarian and an uneven trail.  The sun had begun to set, casting shadows over the land.  I asked August how far we had to go and each time was met by a simple response of “not far.”  At first I was satisfied with his answer, but as soon as the sun dipped low on the horizon and the light faded I began to worry.  How far did we have to go?  Would we need to hike in the dark?  It dawned on me that I had made a mistake wearing my tennis shoes because the trail was now rocky, uneven and heading downhill at a disconcertingly steep angle.  August turned on his flashlight, but the beam wasn’t strong enough to offset the encroaching darkness.  I began stumbling over rocks and twisting my ankle, sending waves of pain up my feet to my knees.  Although I knew that our slow pace was on account of my weak condition, I scolded August for letting us to hike so late in the day.  The darkness and uneven path were a treacherous combination, and several times I almost tripped and fell.  August took pity on me and propped me up arm in arm.  It wasn’t enough.  As we tumbled down the dark path I did my best to follow along and let August catch me whenever I wobbled.  A guide met us on the trial three hours into our journey and half an hour after nightfall and grabbed my other arm.  The guide radioed ahead, and Minja met us minutes later.  I eventually abandoned trying to follow and let them push, pull, and haul me to camp.  The pain of being dragged over the rocks with my legs flopping around was excruciating.

We arrived at camp at 8:30 p.m.  It took three guides almost an hour to drag my exhausted shell of a body to Horombo Huts!  My 18-hour hiking ordeal had finally come to an end — but not without consequence.  For the first time I worried that I had injured my knees or legs.  I used my arms to pull myself into my tent; my legs were worthless.  Kay, who had been waiting for me at the camp for quite some time, gave me a hug and congratulated me for making it down in the dark.  I answered her with a faint smile and a sigh.  As an award she gave me a can of beer aptly named “Kilomanjaro,” but I couldn’t drink or eat a thing.  Once again I passed up dinner.  Instead, I simply crashed and drifted off to sleep.