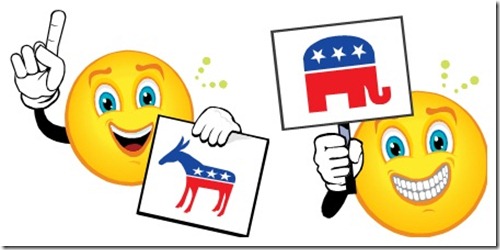 With the Wisconsin gubernatorial recall election today, I thought it was time to get a little political. Election Day in the United States, November 6, is less than six months away and the campaigns are in full swing, so now’s a good time to weigh in on the U.S. presidential race.

In spite of the incumbent status of President Barack Obama, a Democrat, the U.S. presidential race is more competitive this year than it has been since the 2000 Election. The presumptive Republican challenger, Mitt Romney, is virtually tied with the president in public opinion polls. RealClearPolitics’ Poll Average on June 5 showed President Obama leading Romney by an average 2%, a decrease from 4% on April 25. This is within the 2-3% margin of error and puts the two candidates in a statistical dead heat. Based on poll trends, we’re in for a close finish.

Here’s my objective analysis of how key events likely to occur between now and Election Day could give an advantage to Obama or Romney. Where there’s no clear favorite, I called it a “Toss Up.” I am not predicting who will win the presidency. Watch how Obama and Romney fare in the aftermath of these milestones, and you’ll have a better idea of who will win. As the 2008 Election demonstrated, announcements such as the collapse of Lehman Brothers and the naming of Sarah Palin as John McCain’s vice presidential candidate influenced the election. This year’s contest will be no different, and the race is close enough that a single event, such as a seismic jobs report or an international incident, could shift the balance in favor of one candidate.

Advantage: Obama. North Korea (DPRK) warned that its troops have aimed artillery at South Korean media groups and threatened a "merciless sacred war" after the outlets criticized children’s celebrations in Pyongyang. While North Korea often makes vague statements threatening South Korea and the United States with utter destruction, this warning specifically mentioned the longitude and latitude of the locations of seven media outfits in Seoul. While the chance that the DPRK will take military action against the South before November 6 is slim, North Korea has been known to take advantage of a political situation to make a statement as it did in November 2010 when it shelled Yeonpyeong Island. The lower the tensions between the two Koreas, the better for Obama. A pre-election attack on the Korean Peninsula would put him in a difficult political situation at a bad time.

Advantage: Romney. Polls and most political commentators believe that incumbent Wisconsin Governor Scott Walker will win by a sizeable margin and may provide a bump for Romney in Wisconsin, a key swing state. Obama defeated McCain by a wide margin in 2008. Many commentators have indicated that the state may be in play with a larger Republican turnout in November energized by the recall election, and early exit polls show the race tightening to +6 for Obama, a 2-point decrease from the national poll average. Given that Obama won the state in 2008 by 12 points, his support in Wisconsin — and perhaps in other states he carried in 2008 — has waned.

Advantage: Obama. Talks with Iran over its nuclear program are ongoing, and Iran’s admission that the Flame virus caused a massive data loss on its computer networks should be a setback for its nuclear program. Iran will continue to be a foreign policy priority for the United States but is likely to have little or no impact on the U.S. Election. The perception that the United States was involved in Flame’s creation — whether true or not — may help or hurt Obama’s image.

Advantage: Romney. After a political stalemate in May when the Greeks were unable to form a new government, new elections were called in Greece for June 17. The chance that this round will go better is low, and the results may send new shockwaves through the financial markets, especially if minor parties such as Syriza make substantial gains. Ongoing issues over Greek debt will continue to weigh down the Eurozone. While the likelihood that Greece exits the euro and destabilizes the Eurozone before the U.S. Election is small, the country will continue to make news through the campaign period, and much of it won’t help Obama’s efforts to stimulate the U.S. economy.

June 20-24, 2012: The Supreme Court rules on the constitutionality of the Patient Protection and Affordable Care Act (Obamacare)

Advantage: Toss Up. If the Supreme Court declares the PPACA unconstitutional or strikes down the individual insurance mandate, it will generally be viewed as a setback for the president because the law is considered one of his major legislative achievements. Views on whether this will happen vary. According to the Wall Street Journal, just 35% of legal experts who have argued cases believed the Court would strike down the mandate. As of June 5, the sentiment at Intrade put the odds that the mandate will be rejected at 65.3%. If it’s upheld, it will benefit Obama; if overturned, it will be a blow to his reelection campaign.

Advantage: Romney. The Bureau of Labor Statistics (BLS) will release its monthly jobs report for June. The May report released on June 1 showed signs of decreased job growth, higher unemployment, and a downward revision of the March and April job reports. Given this trend, it’s likely that the June report won’t be much better and will be bad news for Obama.

Advantage: Romney. With the violence and unrest in Syria continuing, calls for UN action have increased. The mandate of the UN observer mission ends on July 20, and pressure is mounting for the UN Security Council to take action to “restore international peace and security” per Chapter VII of the UN Charter. Either scenario — failure to respond to continued violence against civilians in Syria or direct intervention in Syria as happened in Libya — puts the president in a difficult political position at a bad time.

Advantage: Toss Up. The Commerce Department’s Bureau of Economic Analysis (BEA) will release its advance report on gross domestic product (GDP) growth in the second quarter (Q2) of 2012. It may affect the race if it differs substantially from the 2.2% GDP forecasted for the United States in Q2.

Advantage: Toss Up. BLS will release its monthly jobs report for July. The previous report will give some clues as to whether this helps Obama or Romney. It’s too early to tell whether it will follow the March-May downward trend.

Advantage: Romney. Several prominent names have been mentioned as Romney’s running mate; most are from swing states. The announcement will provide a quick bounce for Romney. If the candidate is strong and/or hails from a swing state, they will bolster the ticket. If they become a liability, this will be reflected in polls in September and/or October.

Advantage: Romney. The Republican Party will host the convention in a state Obama won in 2008 and is a key battleground state in 2012. A presidential candidate usually has a bounce of several percentage points in the polls following a party convention.

Advantage: Toss Up. The BEA will release its preliminary report on GDP growth in 2Q 2012. It may affect the race if it differs substantially from the 2.2% GDP forecasted for the United States in Q2.

Advantage: Obama. The Democratic Party will host the convention in a state Obama won in 2008 and is important to his reelection in 2012. The candidate usually has a bounce of several percentage points in the polls following a party convention.

Advantage: Toss Up. BLS will release its monthly jobs report for August. The previous report will give some clues as to whether this helps Obama or Romney. It’s too early to tell whether it will follow the March-May downward trend.

Advantage: Romney. The People’s Republic of China will choose a new National People’s Congress (NPC) and elect a new president. Xi Jinping will likely succeed President Hu Jintao in March 2013. However, the political situation in China is usually tense in the lead up to this transition. The situation is particularly contentious this year with the scandal surrounding Bo Xilai and recent events involving dissident Chen Guangcheng. Recent events such as the handling of Chen’s case by the Obama administration and crackdown of foreigners in China indicate that U.S.-Chinese relations may be rocky until the transition period has ended. While Obama could score some points by engaging China on issues such as military cooperation, much could go wrong for him in the year ahead.

Advantage: Toss Up. BLS will release its monthly jobs report for September. The previous report will give some clues as to whether this helps Obama or Romney. It’s too early to tell whether it will follow the March-May downward trend.

Advantage: Obama. The outcome of the race between incumbent President Hugo Chávez and Henrique Capriles of the opposition First Justice Party depends on whether Chávez, who has cancer, is healthy enough to stand for re-election. Various scenarios have been debated, but most point to political change in Venezuela after October that may benefit Obama. A Capriles victory, a Chávez successor, or a more moderate Chávez should lead to an improved U.S.-Venezuelan relationship.

Advantage: Toss Up. The BEA will release its advance report on GDP growth in 3Q 2012. It may be help either candidate if it differs substantially from the 2.6% GDP forecasted for the United States in Q3.

Advantage: Toss Up. BLS will release its monthly jobs report for October. The previous report will give some clues as to whether this helps Obama or Romney. It’s too early to tell whether it will follow the March-May downward trend.

Advantage: Toss Up. As of this writing, President Obama has the advantage of incumbency and is leading in more battleground states than Romney. However, with his RCP Average approval rating at 47.8 and a tightened race, it’s far from certain that Obama will win reelection. Romney has emerged from a heated battle for the Republican nomination in a strong position and can look forward to a number of key events that could work to his advantage. Any of the ones mentioned above – or an unforeseen crisis – has the potential to tip the balance in either candidate’s favor come November. Count on it.

M.G. Edwards is a former U.S. diplomat who served in South Korea, Paraguay, and Zambia. He served as the democracy, elections, and governance officer to the U.S. Mission to Zambia from 2009 to 2011.

A writer of books and stories in the mystery, thriller and science fiction-fantasy genres, he also writes travel adventures. He is author of Kilimanjaro: One Man’s Quest to Go Over the Hill, a non-fiction account of his attempt to summit Mount Kilimanjaro, Africa’s highest mountain. His collection of short stories called Real Dreams: Thirty Years of Short Stories available as an e-book and in print on Amazon.com. He lives in Bangkok, Thailand with his wife Jing and son Alex.