This is the eighth installment of a story chronicling my travels in 1994 as a college student. The six-month journey took me to 20 countries in Europe and Asia.

I stood freezing on the platform at the Rosenheim train station awaiting the train to Austria and chilling under the bright morning sun too cold to warm the air. My frozen breath swirled thick over the tracks at the platform’s edge. Bystanders waiting nearby chatted with hearty laughs.

“How can they be so cheerful at a time like this?” I grumbled to no one. Shivering, I let out a faint cheer when the diesel train with a handful of passenger cars chugged into the station and screeched to a halt in front of me. It waited long enough for me to toss my life on board before taking off again. Pausing in the sheltered breezeway, I cupped and blew on my gloveless hands to warm them. The frosty air trapped inside my jacket and pants rebuffed attempts to unthaw.

In a passenger car filled with commuters, I found one seat next to a friendly, sixty-something German woman named Gertrude. She seemed excited to serve as my impromptu tour guide while the train chugged through the Bavarian countryside. A native to the area, she gave names in English to the scenic towns and villages, forests, meadows, and lakes that passed by. I marveled at how beautiful and orderly the southern German landscape was. Every town was like a Potemkin village and every farm a tourist showcase. Even the jagged, frosty mountains looked fashioned by hand. The grazing cows that shrugged off the cold weather seemed to have their own assigned places in the pastures; every forest tree planted by hand. Bavaria was like all the gorgeous rural scenes I’d ever seen rolled into one, from the grasslands of the Midwest to the foothills of the Rocky Mountains and the soaring peaks of the Cascades, with picturesque Alpine villages thrown in for good measure. Daylight painted Bavaria in a broader, more colorful brush than its reputation for beer, sauerkraut, and Oktoberfest. 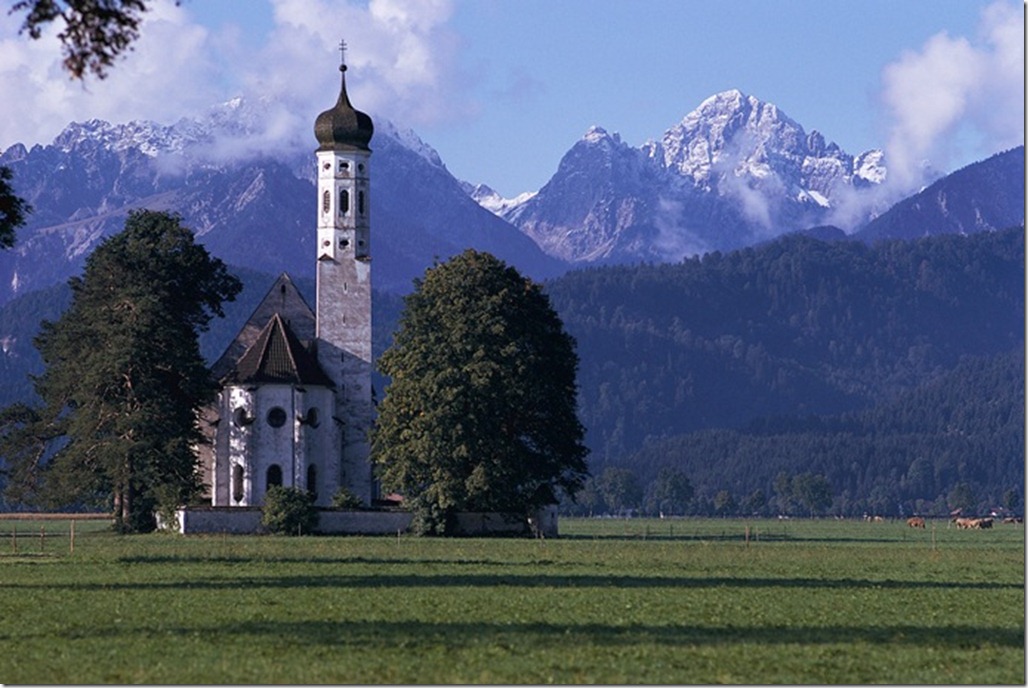 As Gertrude described her home, she piqued my curiosity about what life there must have been like in days past. Peaceful and pristine, Bavaria was once wracked by the tumult of two World Wars, instability, Nazism, division, and a Cold War. Fresh from reunification, Germany had only recently undertaken its most recent post-war transfiguration. For a moment I wished that I could have glimpsed the past through her eyes. She kept talking about the beauty of her country, unaware that my mind was contemplating the past as much as listening to her present.

Gertrude said farewell at her home village not far from the Austrian border. I smiled and bid her Tschüß. Once again, the luggage resting above my head was my sole company.

In the early afternoon, Austria appeared in the window as the German train ended its journey at the border. Reluctantly vacating the warm compartment for the brisk winter air, my belongings weighing me down, I felt like a penguin waddling on a frozen beach on the way to Immigration and Customs. A policeman and two plainclothes officers stopped me in front of the Salzburg train station and demanded to see my passport. Handing it over, the thought crossed my worried mind that they had singled me out for special scrutiny because I looked like a vagabond. The fear that they would strip search me or rifle through my bags nagged me. I stood stoically, silent, as they examined my travel documents. They handed them back a moment later and waved me on without a word. Out of earshot and across the border in Austria, my exhaled sigh of relief billowed like a cloud.

I barely made it on the train to Bischofshofen before it started moving. Winded and feeling fatigued, I sank into a seat and glanced out the window at my adopted homeland. The quaint city of Salzburg filled with baroque architecture evoked images of Mozart and The Sound of Music. Then it disappeared like every other beautiful place I had seen. Feeling a bit despondent, I lamented that the trip was so rushed it left no time to enjoy what could have been a spectacular visit. 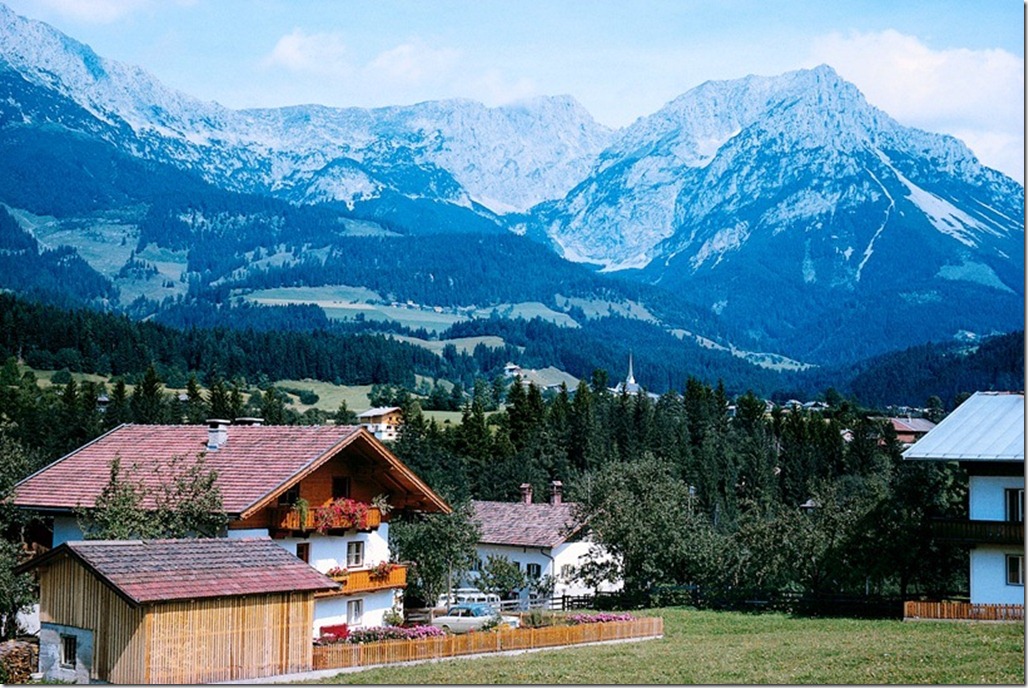 As the train crawled eastbound through the valley away from the Alps, the rugged landscape crumbled and gave way to decaying terrain recovering from dormant strip mines and unsightly factories strewn between the towns of Leoben and Brück an der Mur. The grayish Mur River followed the train like a shadow. Uniform pine trees marched by like a dispassionate military parade.

The village of Bischofshofen was little more than a quick stopover to catch the train from Vienna to Graz. As I sat alone with my thoughts at the deserted rail platform, loneliness and longing for my fiancée weighed on my mind. The realization that she wouldn’t be waiting dawned on me as my final stop drew near. We wouldn’t see each other again for six long months until our reunion on the other side of the world in Shanghai, China. No one, friends or family, would be there when I arrived in the city of Graz. Nothing would be the same for the next six months. This unfamiliar world promised to be new and different, yet the newness would undoubtedly grow old.

Time crept to a near standstill in the late afternoon as the train I caught in Bischofshofen approached Graz. It coasted casually into the Hauptbahnhof train station as if it didn’t have a care in the world. The city spread out and fell away from the train window into a valley where the old town clustered below a tall hill adorned with a clock tower. The view seemed to shimmer in a postcard panorama lit up by the sun peeking through the clouds. Seeing my adopted home for the first time triggered the same emotions — anticipation, weariness, impatience, curiosity, and frustration — that I felt when I touched down in Europe.

Suddenly, the city disappeared behind a grassy knoll. The train slid into the station and ground to a clanging halt, an unceremonious end to my journey. Home at last, I thought. 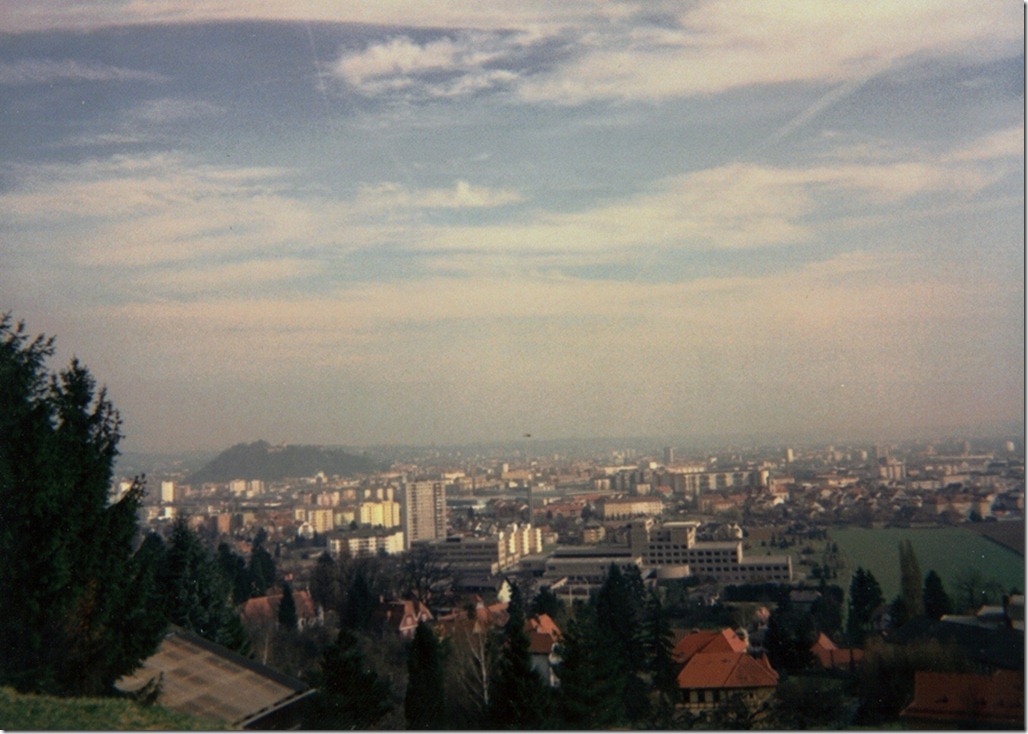 6. A Respite to Rosenheim

Images of Bavaria courtesy of Microsoft. Photo of Graz property of M.G. Edwards. 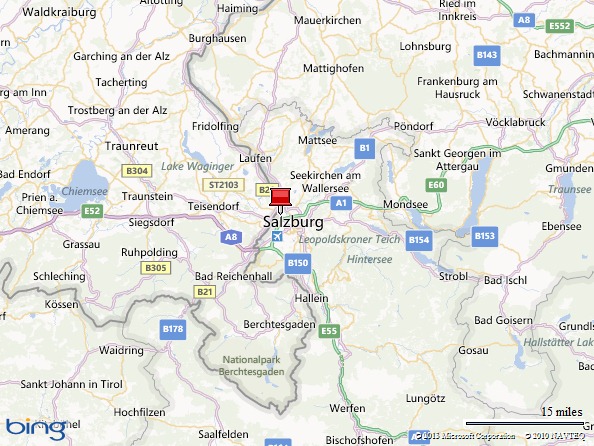