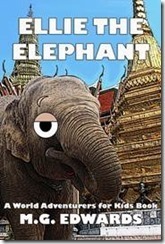 This is the third article in a six-part series about Hua Hin, Thailand, a coastal city near Bangkok on the Gulf of Thailand. This post is about the countryside near Hua Hin. Hua Hin hosts the annual King’s Cup Elephant Polo Tournament, a fun and unique sporting event. The 2012 tournament inspired me to write the children’s picture book Ellie the Elephant about an elephant that dreams of playing in the tournament. Enjoy these travelogues about this fascinating area of Thailand.

The drive from Bangkok to Hua Hin takes about two and a half hours as a drunken crow flies and when traffic is light. The scenery on southwest-bound Highway 35 is forgettably suburban Thailand with more and more rice fields and orchards as the cities thin. At little more than the halfway point near the city of Samut Songkhram, the highway merges with Highway 4 and heads south on the Malay Peninsula. Here lies the beautiful countryside of Phetchaburi and Prachuap Khiri Khan provinces between the Gulf of Thailand and Myanmar (Burma).

Most of the drive to Hua Hin Town passes through Phetchaburi, one of three western Thai provinces that are popular weekend getaways for Bangkok residents looking to escape from the sweltering lowlands of the Chao Phraya River delta. (The other two are Kanchanaburi and Ratchaburi.) The highlands of the Tenasserim Mountains offer cooler weather that blows in from the Andaman Sea. Phetchaburi is worth a stop to explore its scenic wonders, but for those on the way to Hua Hin, the province will still reward them with opportunities to enjoy picture-perfect scenery. Rice fields in the lowlands, including one farmed by Ellie the Elephant’s parents, share the land with rolling hills and craggy mountains. 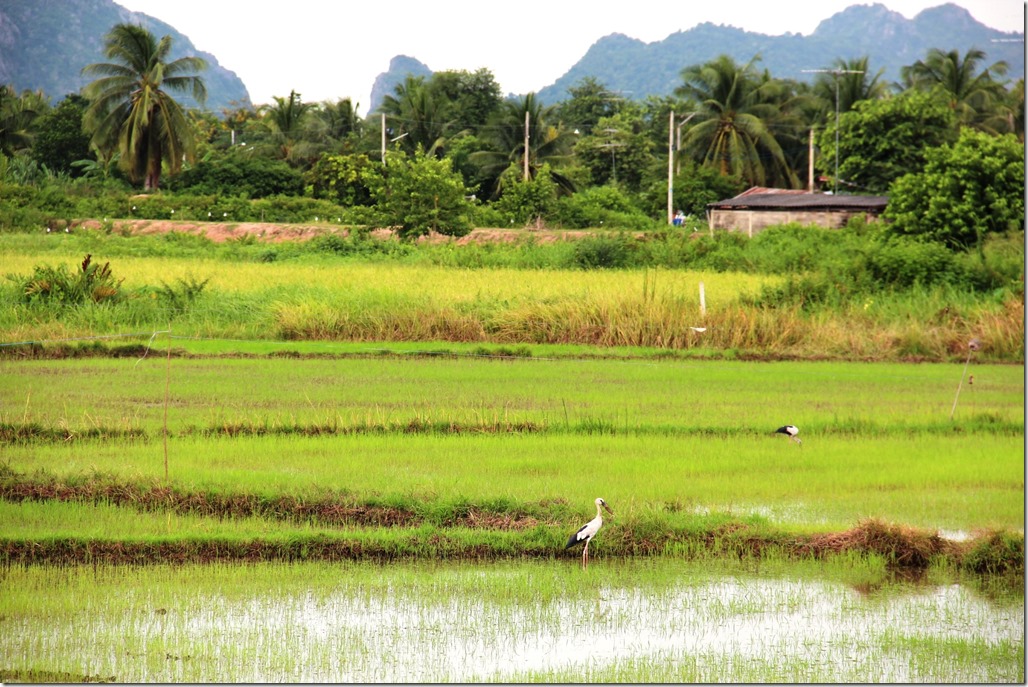 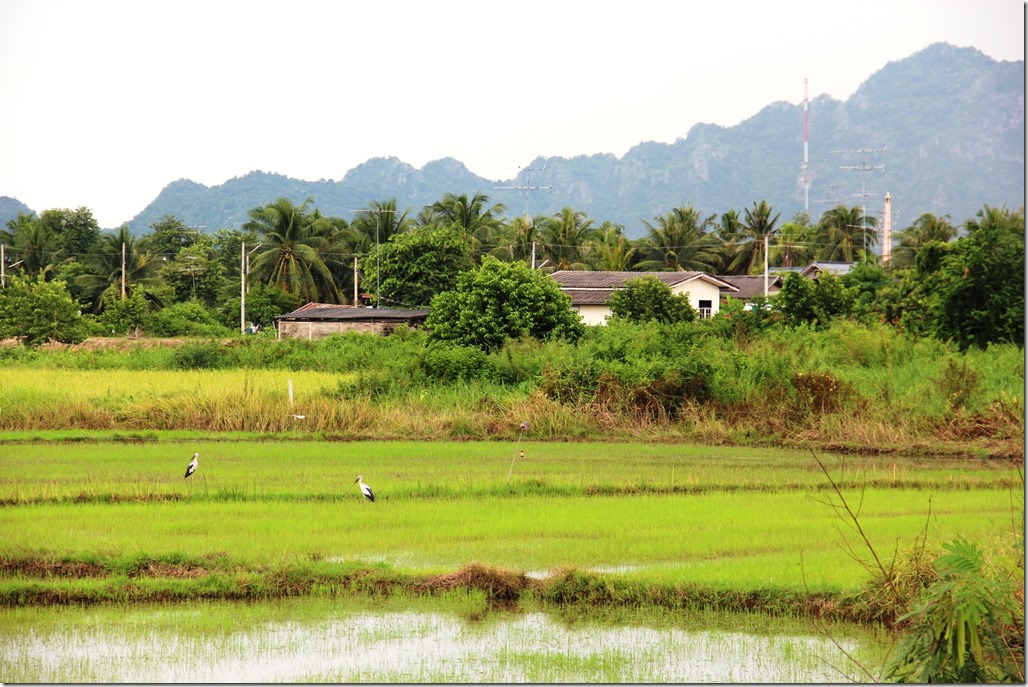 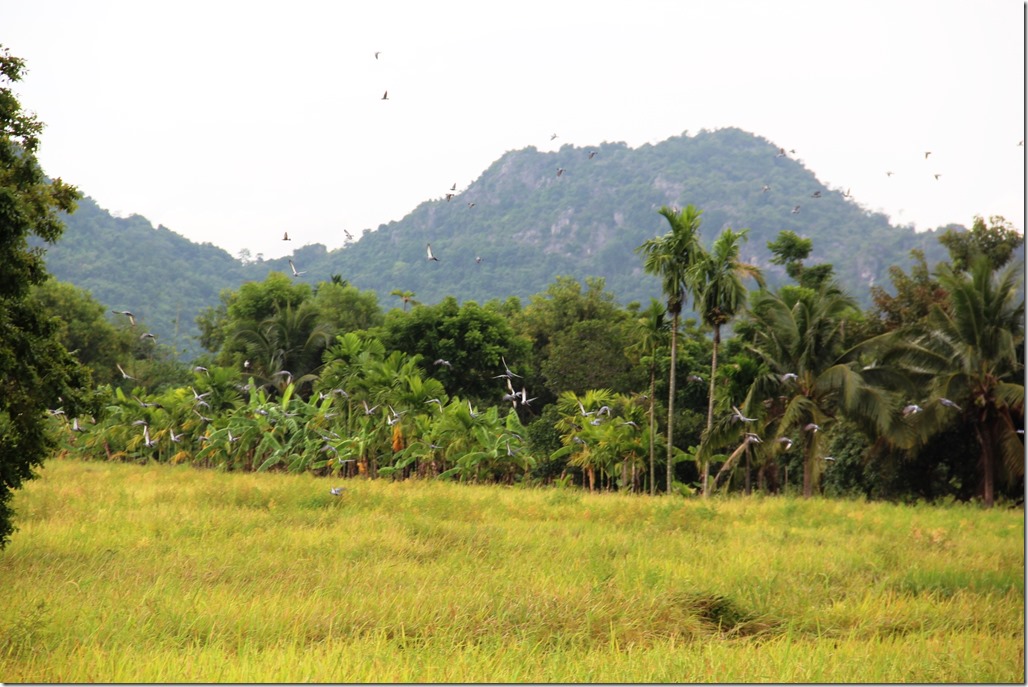 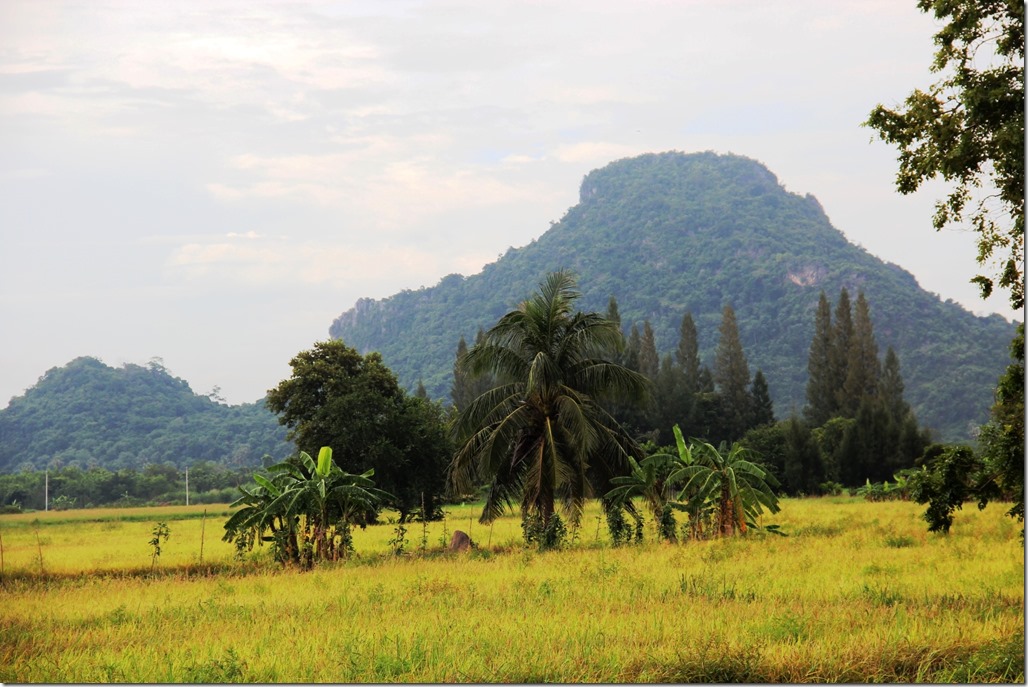 You never know what you’ll discover in the countryside on the way to Hua Hin. During our drive to Hua Hin in November 2012, we spotted a thatched roof lodge at the foot of a mountain reminiscent of a traditional Thai bamboo house with some indigenous elements. 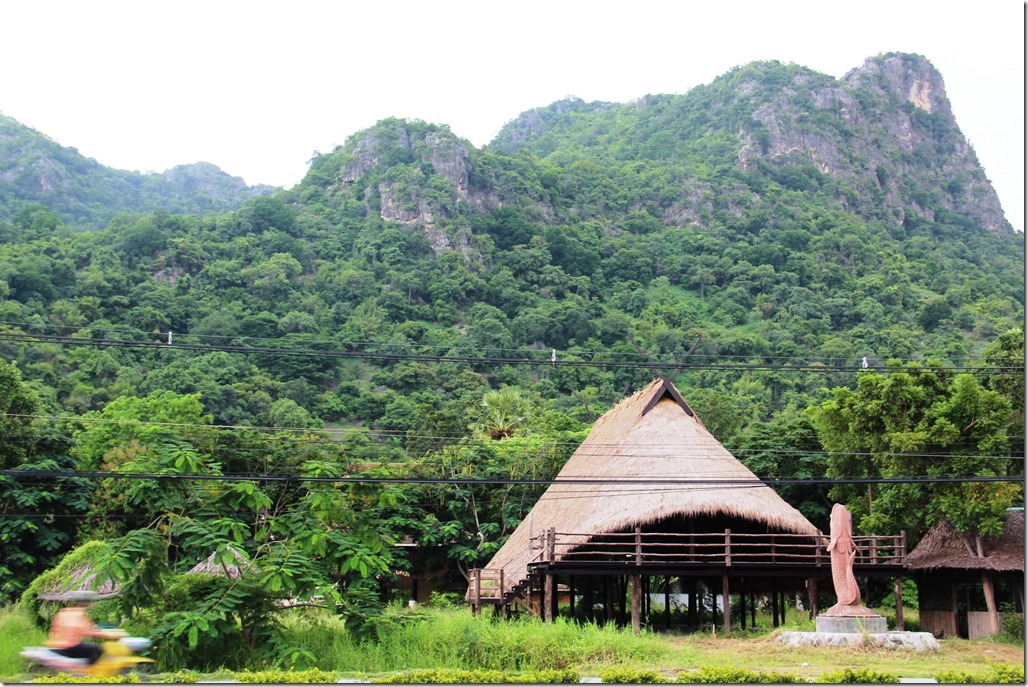 Accustomed to seeing rotund statues of the Buddha, I stopped to examine some statues of a malnourished one. The “Fasting” or “Starving” Buddha depicted a time in the life of Siddhartha Gautama (563-483 B.C.), the Indian prince who founded Buddhism, when he wandered in the countryside for six years in search of spiritual enlightenment and practiced such an austere lifestyle that it left him skin and bones. Realizing that his asceticism would lead to death, not enlightenment, Siddhartha adopted a middle path between the luxury of his youth and his austerity. The statues on the way to Hua Hin recalled this period in the Buddha’s life. 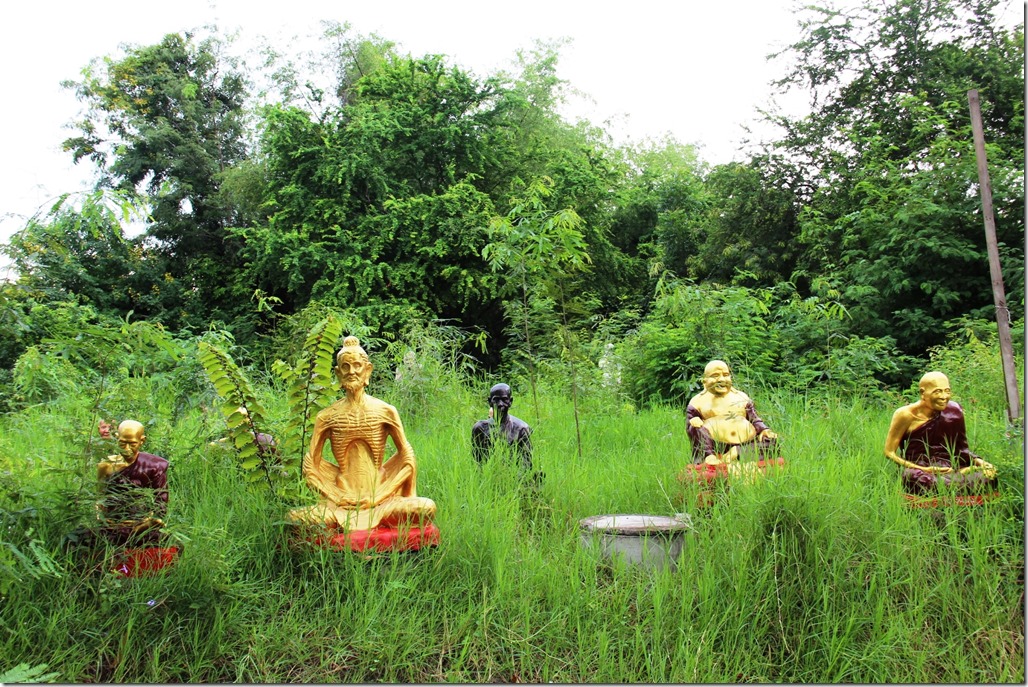 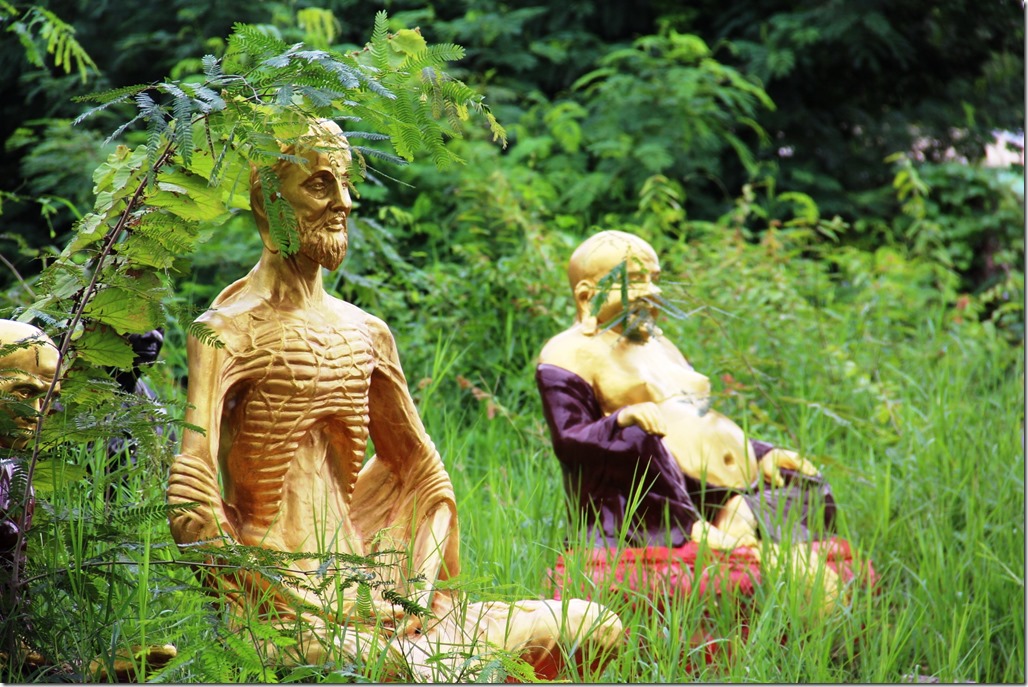 Ellie the Elephant calls the countryside near Hua Hin home. Along with her parents and brother, she works in the fields when she’s not in class or playing at Pachyderm School. While she doesn’t mind helping out with chores around the farm, what she really wants to do is play elephant polo. Read Ellie the Elephant, her incredible story about following her dream – to play in the Elephant Cup tournament! 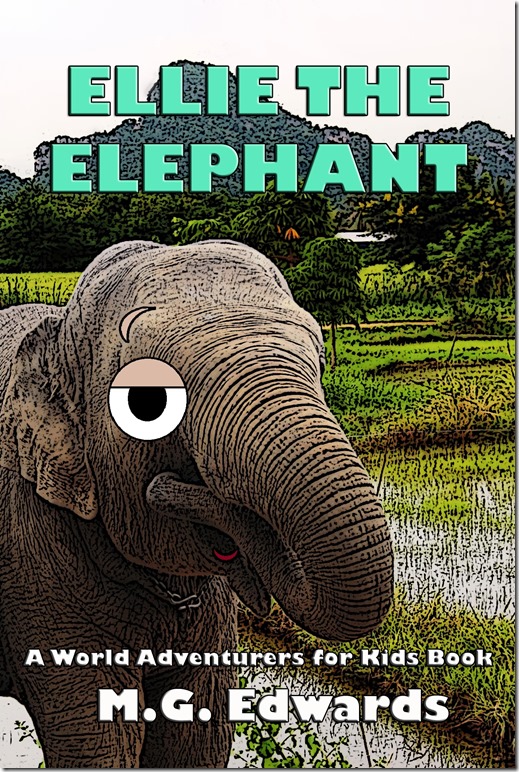 Ellie the Elephant is now available as an e-book or in print from Amazon and other booksellers! 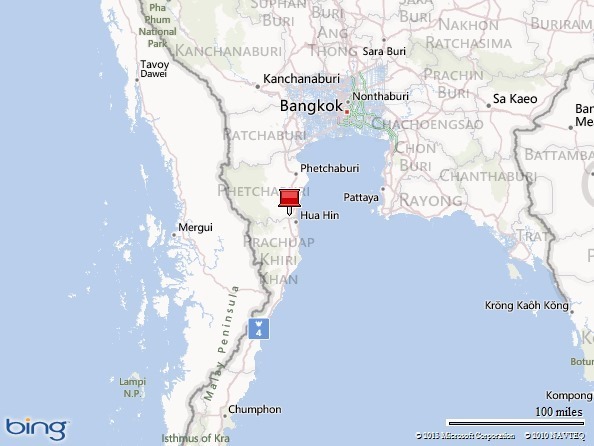 Maps courtesy of Google and Bing.