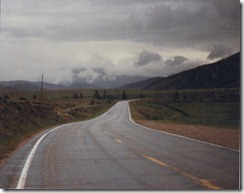 During the summer of 1986, I set out with a group of cyclists on a 250-mile tour of the Montana countryside. Youth for Christ organized the five day, round-trip tour starting and ending in the city of Missoula. The circuitous route took us through some of Big Sky Country’s finest scenery. We followed the Interstate for about 50 miles before turning south on Highway 1 heading to the town of Anaconda. Each day we rode about 50 miles, far enough for us to enjoy the tour without wearing ourselves out. Two sag (supply) wagons followed us, hauling luggage, supplies, first-aid kits, tools and accessories, and spare bicycles. The sun beat down on us the first two days of the trip, and the sag wagons relieved us from the high heat with shade, water, and snacks. 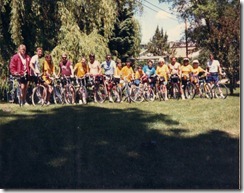 A mix of riders and bicycles joined the tour. Sexagenarians rode with teenagers. Racing bikes peddled side by side with mountain bikes and rickshaw bicycles with bulbous tires that looked as if they were featured in a vintage 1950s film. I rode a Schwinn Traveler touring cycle that I had bought for this kind of tour.

We rode in groups of five to six about ten minutes apart. Traveling in small groups helped us get acquainted and support each other if needed.

The leisurely ride to Anaconda and relaxation we enjoyed there on the second day lulled us into a false sense of confidence that the rest of the tour would be easy. More than a third of the journey lay behind us, and we were well-rested and ready, we thought at the time, to tackle whatever lie ahead. Nature has a way of humbling even the most confident. We woke on day three to heavy clouds so laden with moisture that they dragged on the ground and covered the highway in mist, an early indication that the day was going to be harder than the last two. Our guides warned us to expect difficult riding conditions. We left Anaconda dry and were accosted by a downpour half an hour after departure. 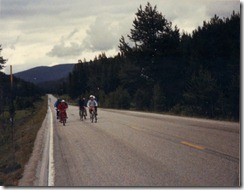 I refused to let the rain get the best of me. I climbed hill after hill, pedaling as fast as I could to the top, coasting down the other side, and then catching my breath for the next challenge. The drizzling rain cooled me down. If I could beat the rain, I told myself, I was not going to let the terrain hold me back. So intent was I in conquering these obstacles that I misplaced my group and found myself riding alone on a lonely stretch of highway.

Another cluster of cyclists rode far ahead of me, and I sped up to catch them, but I never caught up. I continued my roller coast ride over hill after hill. Each time I reached the top, I surveyed the landscape for signs of life. The group ahead was nowhere in sight. Fog made visibility more difficult. Except for small patches of grassland and forest, fog banks covered the mountains and valleys in sheets of gray.

The other group was somewhere ahead, so I picked up the pace and rode on for a couple hours until I reached the end of the road. Highway 274 ended at the junction of Highway 43, and I had to turn left or right to reach our next destination at Wisdom, a small town about 50 miles south of Anaconda. The junction did not have any road signs to indicate direction or distance, and I did not have a map. I was not sure which direction to turn. If I made the wrong decision, I could end up lost and separated. I thought about stopping at the junction and waiting for someone to pass by, but I decided to press on because I was cold, wet, tired, and hungry. Rain fell in sheets, soaking my windbreaker and biking shorts. My shoes felt like concrete. I decided to turn right and ride west. Our route, after all, took us west all the way to the Idaho border. I prayed that I had made the right choice and kept going.

Now that life is starting to settle down here in Virginia, I’ve focused more on getting in shape.  Once upon a time, I thought rather foolishly that I could go on the “Korean” diet and miraculously lose weight.  What’s the “Korean”diet?  Well, I’m not quite sure–I never figured it out.  It’s essentially the contention that most Koreans are in decent shape, despite the fact that Korean food–at least what you buy in the restaurant–is rather fattening, and not a few Koreans smoke, drink, and work too much (read:  sit most of the day at a desk).  I assumed that if I acted Korean, at least in terms of consumption and activity, I too would lose weight.  Au contraire (that’s French, not Korean).  I gained weight.  Someone let me know that Korean physiology lends itself to thinness, and I am of stout Anglo-Scandinavian stock that gravitates towards rotundity and portliness.
So the “Korean” diet didn’t work.  Now that we are headed to Paraguay, I decided to go on the “Paraguay” diet.  So, what’s that?  Well, it doesn’t have anything to do with the cuisine.  As I understand it, Paraguayan cuisine is rife with red meat (read:  beef) and starch (something called “sopa,” a potato-ish vegetable).  The “Paraguay” diet has more to do with having a significantly heightened level of physical activity.  The January edition of the Foreign Service Journal rated Asunción, Paraguay one of the worst Foreign Service posts because it is so “boring.” (That is obviously an unscientific observation by someone who either doesn’t get out enough or needs to find some new hobbies.)  Frankly, boring is fine with me.  Boredom is preferable to bullets, blackouts, blizzards, and excessive beasties found at some posts worldwide.  It lets me focus on the “Paraguay” diet; that is, fill the down time with physical activity that necessitates the slendering of my body.
Whereas the “Korean” diet focused on what I eat, the “Paraguay” diet focuses on what I do.  I’ve never found that dieting helps me lose weight, unless I completely cut out eating sugary foods.  My body responds much better to physical activity and beating it into submission by working out until I am sore (like today, when I rode my repaired bicycle back and forth from home to work.
I’ve already started the “Paraguay” diet by doing sit ups, cycling, and walking as much as possible.  I bought a pedometer to measure my caloric burn rate, but so far, it’s been disappointing.  It’s disheartening killing yourself to burn 300 calories.  I’m hoping that by the time I arrive in Paraguay I will be so far along on my regimen that it will be easy to continue; bad streets, cobblestones, tropical weather, and petty theft be damned!